I agree they should have released it with the announcement, as to not let the disappointment fester.
Bethesda should have known that any mobile game would be met with caution, at least with the game in hand the games merits could be judged first hand.
the release date they mentioned is "this summer" so any time within the next 2 months
I've signed up to receive news and updates from the "Gokeen" website.

in the mean time I've been playing through the old Keens.
Finally beat the Forbidden temple level for the first time!
Top

I thought the recent mobile Lemmings game sounded bad, but at least it still resembles Lemmings. This is just... WTF. I don't think I'll even look at this again (and this is coming from someone who actually enjoyed Keen GBC).
Top

The website wasn't even up during or immediately after the announcement, so I have little faith that they'll hit the "summer" release window.

All I know is they said something about a "soft launch", coming "this summer".

Yeah, you're probably right... just the amount of shock from the announcement sparked a pretty strong reaction. I've cooled off now that I've done some venting.

proYorp wrote: ↑Wed Jun 12, 2019 6:06 Now that Zenimax or Bethesda or whoever owns the IP is taking advantage of it, are they going to be cracking down on mods and fan games if they find them?

I highly doubt it. Commander Keen doesn't create a large profit. It's why the games on Steam are worth pennies, and why Bethesda made a cost-effective mobile game rather than a big budget 3D platformer. Doom on the other hand, is a million dollar franchise, which is why Zenimax cracked down DoomRL, because of the possibility of lost profit. As long as Commander Keen remains the obscure PC title it is, Zenimax won't crack down on the Keen fangames.... at least not yet anyway.

True, the small size of the modding community probably doesn't pose much of a threat to them anyway. I wonder if they are even aware of it's existence.
Did some of my own research into this, and it seems that Bethesda is usually pretty cool with mods for their other IP's such as Fallout. One exception I found is something called "Doom Remake 4" which apparently got a Cease and Desist recently, allegedly for being "a stand-alone release using the Doom IP". Possibly not a good sign for fan-made games.
This is only from my light research though, so I probably don't have as complete of an idea as someone actually involved with any of these communities.

Benvolio wrote: ↑Wed Jun 12, 2019 15:53 We can bridge this difficult time if forums and keenwiki go down, by sending paper newsletters and 3 1/2 " diskettes to each other!

You know, the recent PCKF outage makes me wonder if we actually should have some sort of contact info directory (for emails or whatever) outside of here, just for the sake of preparedness. (I actually still can't load this site through my usual means, neither can T-Squared, hopefully there's not anyone else who's totally in the dark.) There's the PCKF Discord, but not everyone is on there and it'd be hard to join without any prior connections, such as the invite link in the thread here, or already having friended someone on there....

Ah, that absolutely crushes me.

That's just... that's depressing. I can't even imagine how it must be for Tom. I mean, I've invented characters and stories before, to have your own creation held hostage like that would be the most disheartening thing. Especially one with such a personal connection as being based on one's own childhood.
For me that's the biggest issue here. If it was Tom rebooting the series I'd be happy, even though it would likely still have some changes here and there. But the fact that it's just done by whoever they happened to put on this team of devs, who may or may not care about the series, it does not feel like a genuine continuation. They might legally own the IP, but to me, it's always just felt stolen. And this reboot is just insult to injury. I really wish there was something we could do.

Man, I wonder what it would even take, realistically, for Bethesda to even consider selling the IP. An offer from a company bigger than they are, with all their $2.5 billion net worth? Their own bankruptcy? Or something else equally unlikely?
At the very least, Tom did say that he'd reveal the plot for "The Universe is Toast" on Keen's 30th birthday if he didn't have any other opportunities. Something to look forward to at least, I guess.

So a really weird thing happened. I got an ad for this on YouTube.

That was super trippy though. For as long as I've known about Keen it's just been really obscure, rare to hear about outside of very specific groups. And now I've gotten an ad for it. When I think of ads I usually think of big things like Honda and Avengers. So that was just a huge mindflip for me. Like what is this world now.
"Friendly. Very friendly. Too friendly."

That was super trippy though. For as long as I've known about Keen it's just been really obscure, rare to hear about outside of very specific groups. And now I've gotten an ad for it. When I think of ads I usually think of big things like Honda and Avengers. So that was just a huge mindflip for me. Like what is this world now.

Why are they paying to advertise a mobile game with no release date?

Why is it SO SLOOOOOOOW? Who thought this was fun to play? It looks like they spent more money on the trailer and hypework than they did on the game proper.

I don't understand these Bethesda people. Commander Keen doesn't even have value as IP on its own. It has value as a puzzly adventure/exploration platform game, mostly to people born in the 80s and 90s, for the desktop platform. And it has a lot more value if you let Tom Hall design the game (:

I hate mobile phones. They ruin everything. I will never own one.

All of my unhappy emotikeens
Top

the problem with bringing in Tom Hall is that he's not a big name in the game industry anymore, he hasn't worked on a hit in years.
Top

I found out that Claire Almon is the author of the backgrounds from the trailer:
https://twitter.com/clair3a 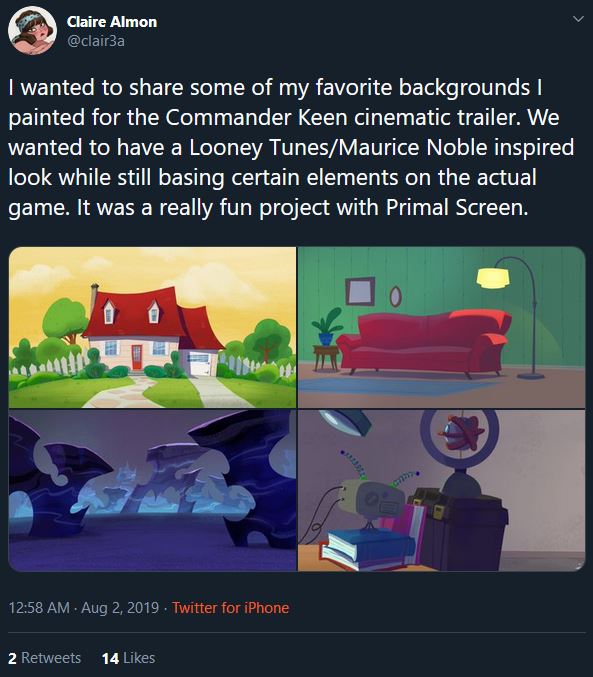 So they wanted Looney Tunes inspired look? I'm not gonna comment on this other than that, it seems like Bethesda has hired an outsider studio (Primal Screen https://www.primalscreen.com/) to do the graphics and stuff. By the look of it, It seems like they've finished their job and they will not work on this anymore.
More from me: Planet Cloudius IX | Jill 4 | Dave levels
Top

The graphic style is fine IMO. The gameplay and overall direction is what I'm concerned about.

Simple fact is - unless they actually outright go with retro-style low resolution graphics, no matter what they do it won't look completely like the original, just due to how much time has passed and how much graphic technology has progressed. I do actually think the style shown there works alright for the Keen universe tbh.
Top

I'm starting to think that it might be worth trying to contact Bethesda to find out if the game was cancelled.
It's been over two months without a peep of news since the reveal.

Anybody know how we should go about doing that?

I'm actually vomiting through my eyes (in between tears of blood), while also choking on disappointment. I guess we'll just have to remember that the real new Keen is in the mind of Tom Hall -- where it, sadly, might stay for good. Better not existing than existing in corrupted, insane, FALSE FORM. Sigh. I shall return to the void...

It kinda seems like some people in this thread have the impression that if not for this, we would be getting a "real Keen sequel". It's been obvious for years that that is not going to happen. Plus, it's been so long now that even if it somehow did, there's no way it could possibly live up to the expectations that would've built up.
Website
My music on Bandcamp
My music on Soundcloud
Top

Nah man... clearly the release date has been set for Christmas 2092. All we have to do is wait until then! We won't believe our eyes!
Top
Post Reply
107 posts