that was a good one!
More from me: Planet Cloudius IX | Jill 4 | Dave levels
Top

I'll just think of this as a spin-off that takes place in an alternate universe. The trailer reminds me of Fairly Odd Parents. Nice animation.

It's clear that they weren't going for faithfulness to the original here, but that doesn't necessarily mean it's bad as a standalone thing. I can't really tell whether the gameplay is any fun or not. I haven't had much luck with action games on smartphones in general - I think only turn-based games really work on that platform, at least for me...

I'm often confused about why a copyrighted IP gets bought and adapted when the result is so different that it may as well be something original. I'm convinced that the only reason it happens is the automatic free promotion that results from media that uses that "hook" to write a story about it.

As for this new "adult Keen" timeline they've created, I kind of prefer the one in Ruin of Roib. Although I realize that it's not exactly mass market.

Personally I think it's unlikely the game is cancelled.
it they were planning of giving up on the project they'd just release it and make what money they can.
Bethesda Zenimax, has never in the past had problems releasing unpopular entries.

I also don't believe this is a franchise cash grab, Keen just isn't relevant enough in pop culture.
it's also telling in the E3 presentation that they only mention the franchise as a note at the end.

now consider the dozens of nods and references to the original,
I think it's possible the Developers do indeed care about Keen and his past.
and only got greenlit by Zenimax for a mobile experience, they may hae agreed because "that's what kids' like these days"

I firmly believe one way or another the negative fan raction shocked them
1: one because of how many people still care about the old Keens. and 2 the general dislike for mobile
going with my assumption that they actually care about Keen, they may have realized their game need an overhaul
repurposing the existing graphics into a traditional Platformer might not even be that difficult.
the might also be considered a PC release do to recent mobile controversies (if the need money for an overhaul, I hear epic is throwing tons of cash around)

I may be dead wrong about all this, but at least this is my hope
Top

Whatever they have decided, the fact that they're not responding or communicating with the fans ever since can only be interpreted as a bad thing and a bad decision on their side. It shows how corporate they've become and how much they care about gamers (hint: they don't). They only care about money. Since the backlash, they've decided to mute it all. And snce the reveal, there's nothing on their Twitter, Facebook or Insta. There's not even a Commander Keen section in their forums. Their Facebook page looks like it's been hacked or it is a parody. If you look at it, you'll find a single post on June 17 that repeats itself countless times, and each one of these posts are with zero views/comments. As of today, their youtube video "Commander Keen — Official E3 Announce Trailer" got 1.5 million views (which is not bad, but it's objectively a minor number compared to their most popular videos), 10k dislikes and 1.4k likes.

How is that there's nobody in their company to communicate with the fans about that? Any response would have been better than complete silence. I think their corporate culture doesn't allow them to communicate with fans freely as some other companies do. They act like they are a big corp that doesn't give a garg. They could've at least said that they've made a mistake, which would be at least a little step in the right direction. I'm mildly disappointed.
More from me: Planet Cloudius IX | Jill 4 | Dave levels
Top

recently there's been a number of big company community managers who only stock the fires by engaging with critics.
it's possible Zenimax has asked the developers to keep quite until an official announcement is made to avoid making matters worse
Top

I watched the game play trailers and can't get that music out of my head.

Oh man, one can hope

. Unfortunately, the game is out. But it's only available in some countries or it's in early access? Check it out here: https://play.google.com/store/apps/deta ... manderkeen

I don't see it on Google play store either (I'm in Northern Europe). Commander Genius is still the first result when searching for "commander keen".
Still not sure how to best handle the situation:
A) ignore and not download to show how little I am interested
or B) download, give a negative review and then delete...

It's available here - but I'm not sure I can get it, I'll have to see if it's compatible with my Chromebook (no other Android devices) and that won't be till later tonight. Will try, though!
Writer. Translator. Player of games. Only bites when asked nicely.

The site you linked states it is not compatible with any of my devices. And the Google Play store on my phone doesnt' even list it. (In the UK).

How on earth do they expect a game, which is unlikely to gain any huge amount of hype based on what we have seen, to even break even if it won't work on ordinary people's phones? Am I really that odd for using a €140 phone bought in 2017, or does everyone else apart from me funnel enough money to buy a car into the marketing machines of Apple et all every six months?

This is definitely not something I am tempted to spend any of my money on. After all, I have AOE II Definitive Edition to buy, a franchise that does continue to respect the core essence of the original game.
Top

I'm pretty sure that I ve red some negative reviews, bashing the game for not being a proper Commander Keen game, but are now deleted...
More from me: Planet Cloudius IX | Jill 4 | Dave levels
Top

Quite a bit behind schedule, isn't it?

I seem to recall they announced that they would do a beta release "soft launch" in certain regions to start with, maybe that's why it's not available for everyone. Ironic considering how much the actual Keen fanbase is spread across the world.
Even with the reduced availability, it's funny to see how after 3 days it only has "100+" downloads. For a AAA game company, that's ridiculous.

Roobar wrote: ↑Thu Nov 21, 2019 7:14 I'm pretty sure that I ve red some negative reviews, bashing the game for not being a proper Commander Keen game, but are now deleted... 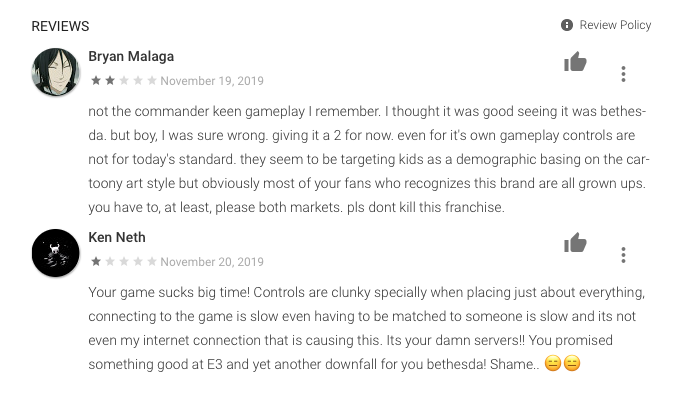 I can still see these, the only two reviews I've seen yet.
I like how the first guy rated it 2 stars, instead of just going with the simplified 1-or-5 that people most commonly seem to use. You can tell he actually put thought into giving it a bad review.
"Friendly. Very friendly. Too friendly." 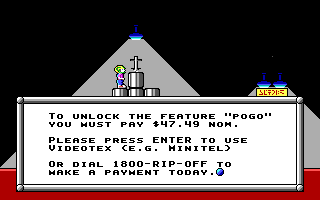 Hi... I almost never post in this forum... But... They just destroyed the franchise... And my favorite superhero...
I found the gameplay video below, with game download link in the descriptions... It worked fine in my Galaxy 7:
https://m.youtube.com/watch?v=OdQcJlwMUQc
Now I know how the son of Commander Keen became the mad Doom Guy... His childhood, as shown in this game, was very boring, uncreative and completely destroyed by ZeniMax/Bethesda...

Now I must reconsider and say that the GBC sequel is just an underrated gem...
Top
Post Reply
107 posts