It's surprising how many Keen/Dopefish references are there in Doom 2020. There are also many other Doom/Wolfenstein ones, but in this topic I decided to put all the Keen ones from the internet in one place. 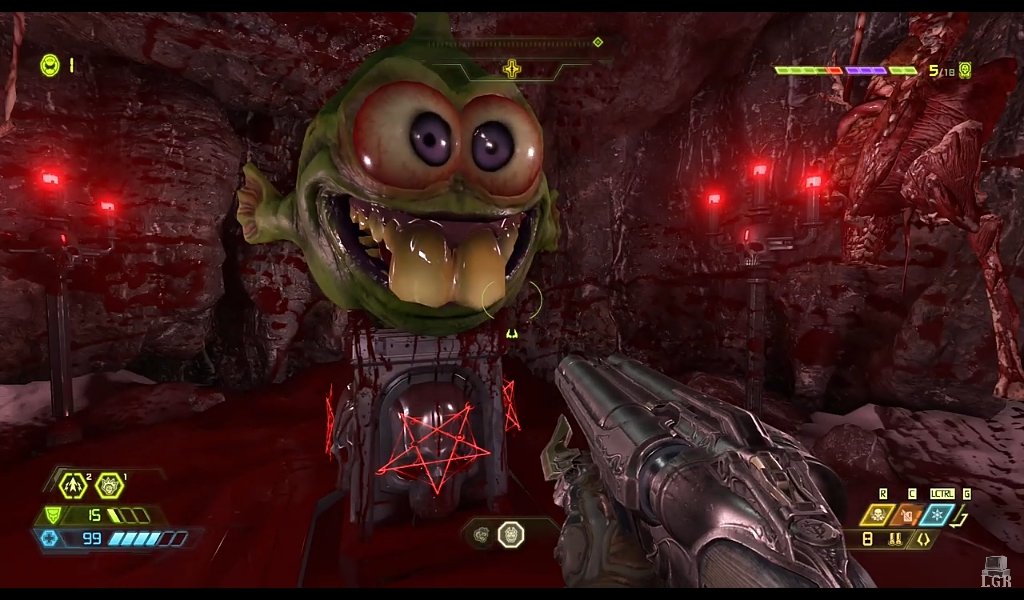 There's a video of that secret in LGR's Doom review. 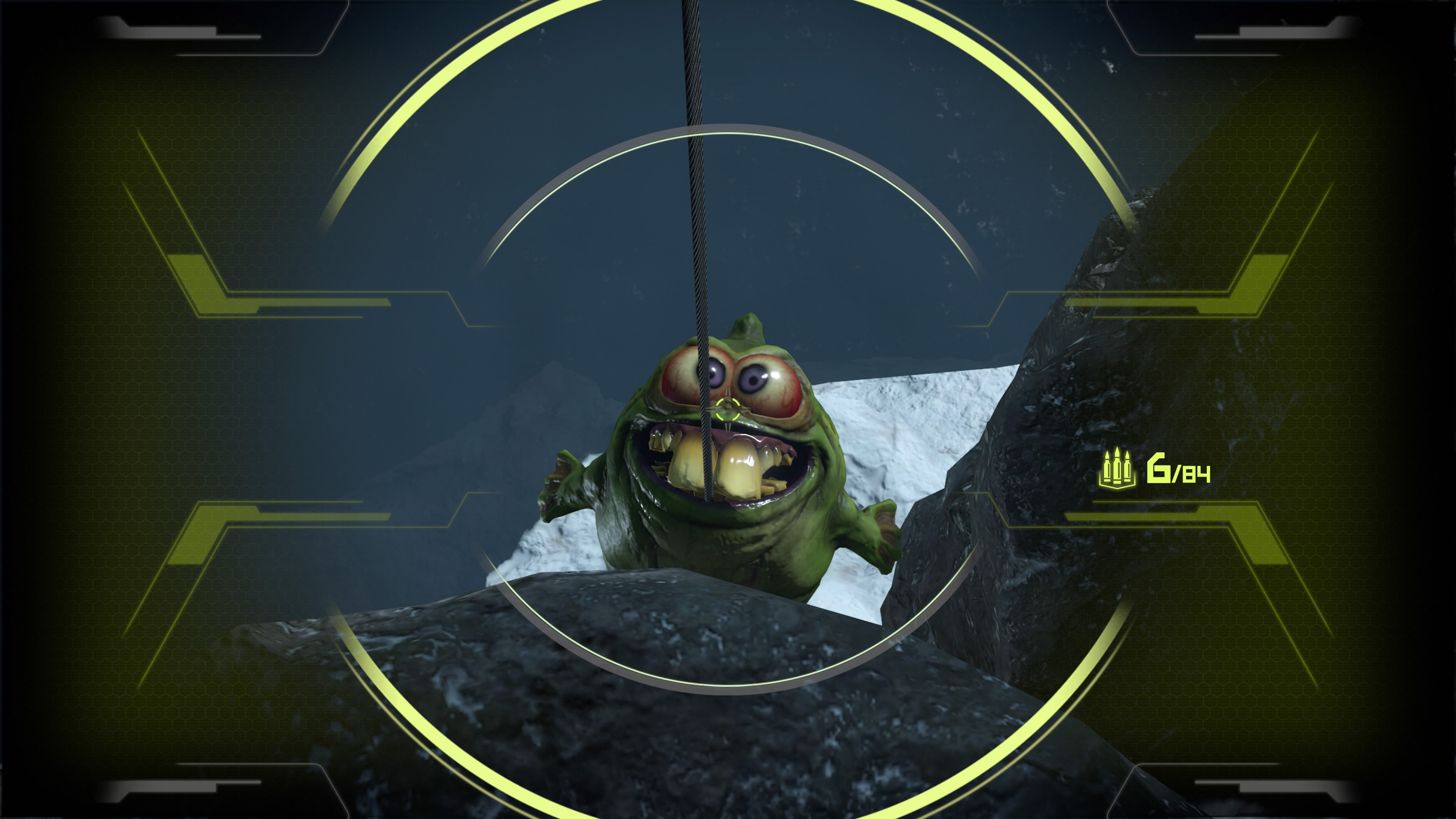 And here's a video of that one:
https://www.youtube.com/watch?v=Ylao30hYYEs

IMKO: Well, there was a hanging Keen in Doom 2. Now there's a hanging Dopefish? Usually, the phrase is "Dopefish lives!", but now perhaps id software killed the Dopefish too? Or it's just one Dopefish that the demons catch. 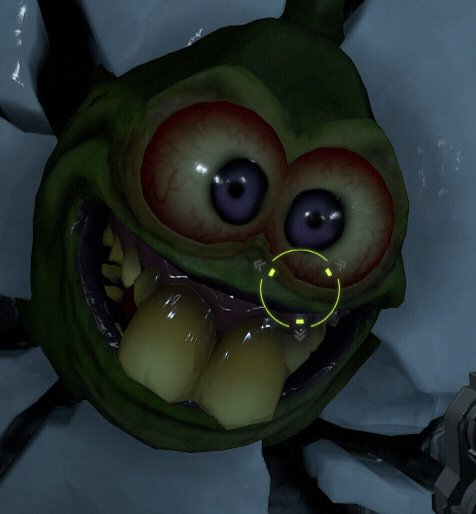 6. Here's another Dopefish reference as a change: 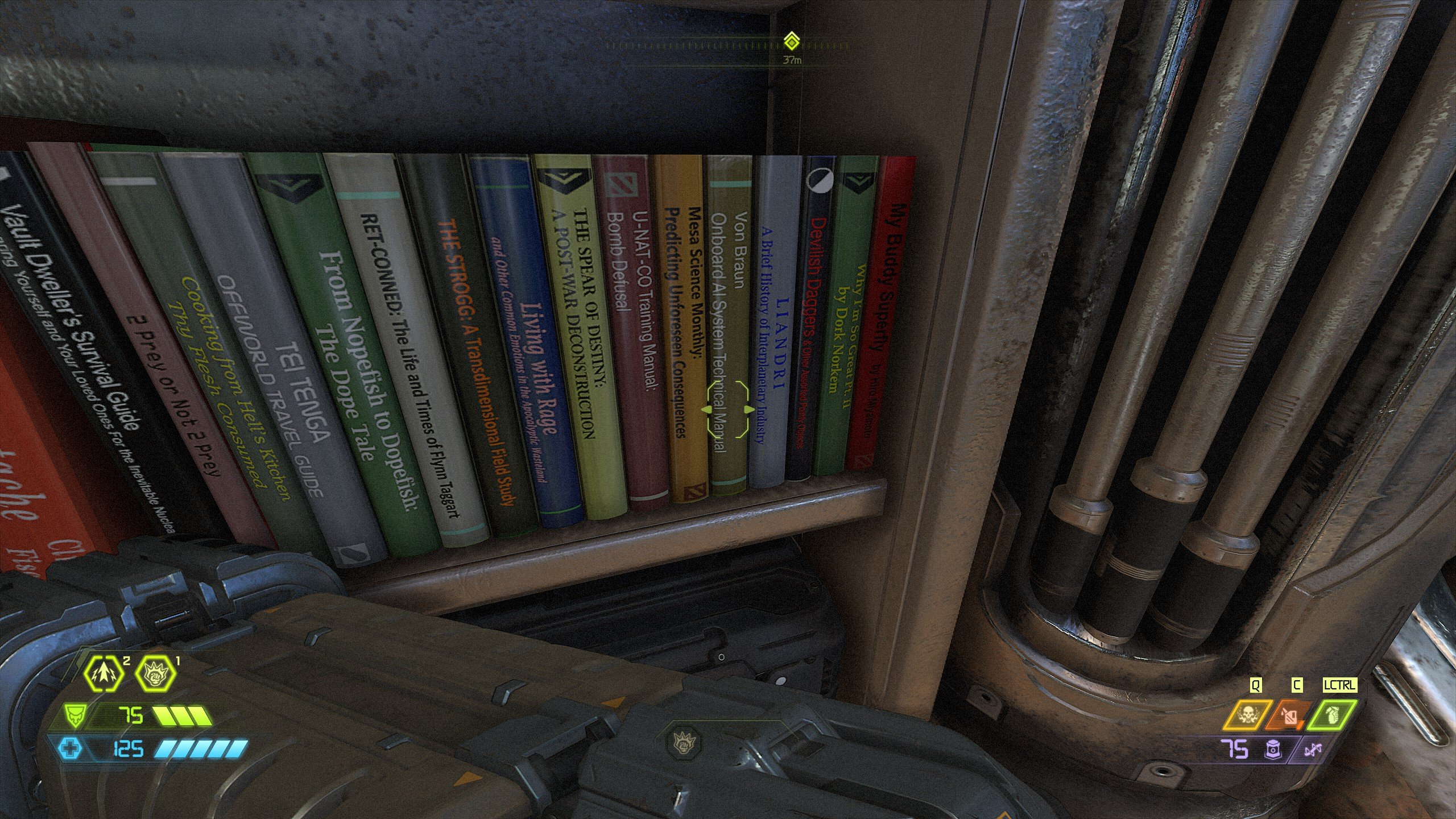 7. Above that shelf though there's a Commander Keen reference:

Unsurprisingly, it's yet another Keen skull. This time they even added his zapper though. 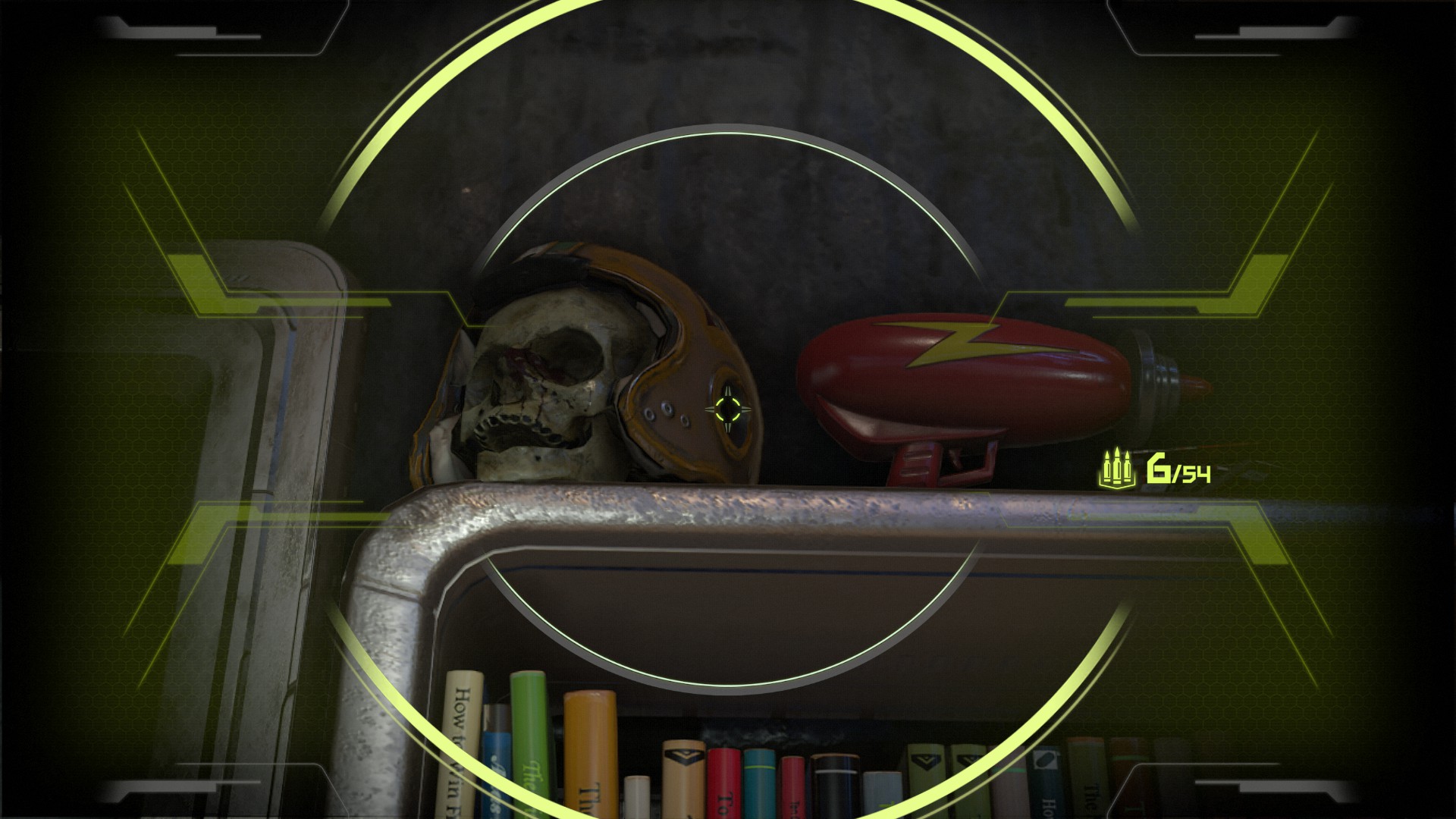 IMKO: That's an interesting one because it's called "Shadows don't scare Commander Keen", while the Keen skull suggests to me that they've obviously killed Keen already long time ago in Doom 2.

It's not that it's the first time we've seen Keen's skull though. But I was hoping this time around they would've make something else for a change.

But that's also surprising and confronting at the same time as Bethesda is trying to revive him in a mobile reboot.

Another interesting thing is that you can find Daisy Bunny several times alive in the game, while in Domm 2 in the ending screen, it was slayed by the demons.

9. Not enough Dopefish references! Here's the "You've got to eat your vegetables" with a Dopefish cover art.
https://youtu.be/_vX845CKLLQ?t=649

IMKO: The interesting thing here is that poster of a Dopefish that is eating broccoli near some of the underwater mines in the well of wishes. That's a really good one. 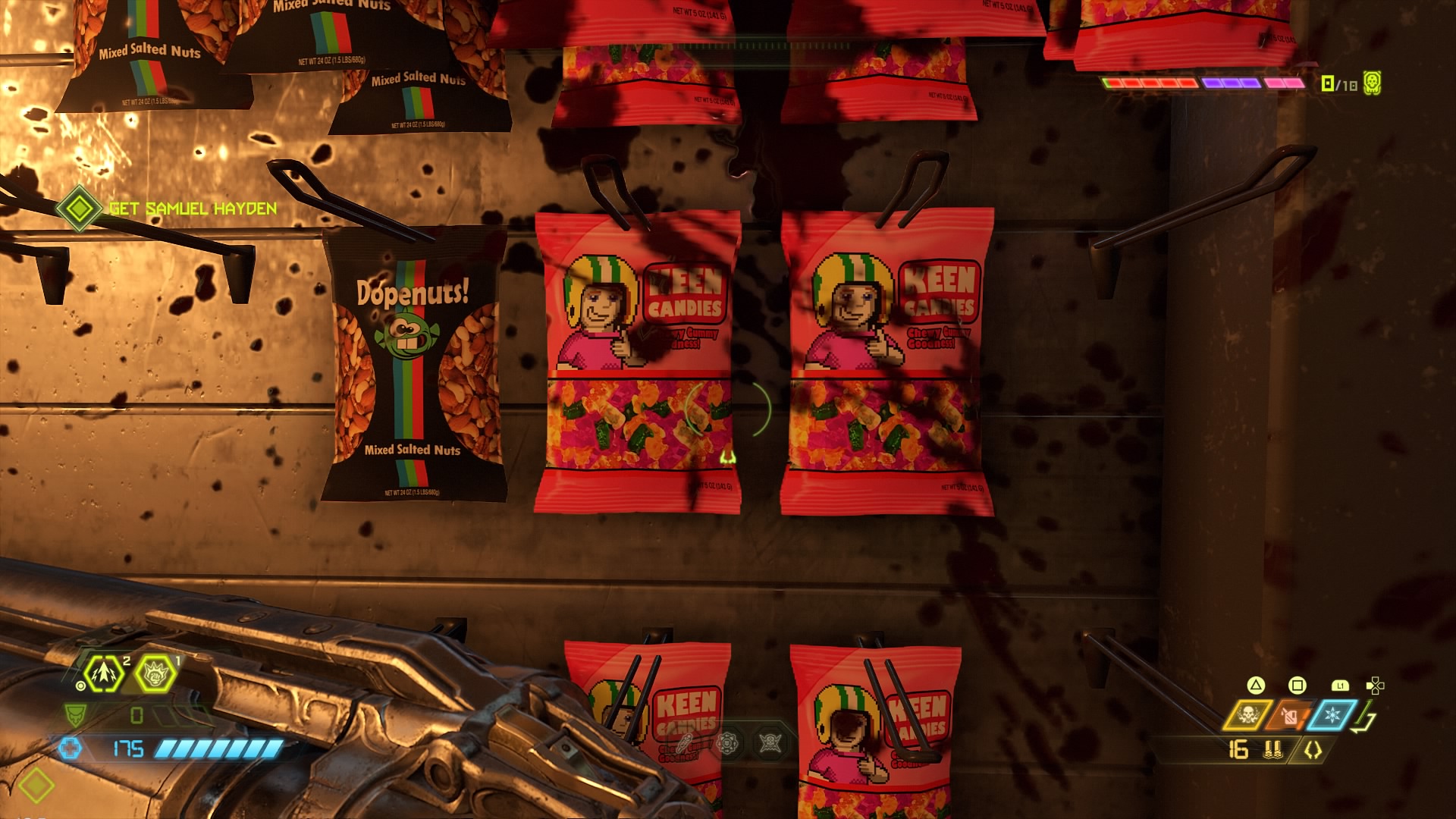 Thanks for the compilation! Awesome to see all these cool easter eggs! My PC will never be able to play this game so I'm glad to see it here.

Thanks! Btw I also thought that my PC wouldn't be able to run this game, but it runs it surprisingly well. It's much more optimized and fine-tuned than 2016.
More from me: Planet Cloudius IX | Jill 4 | Dave levels
Top

I think the Keen Skull secret isn't cool. Keen is a kids game and this is kinda disturbing

Doom, however, is not a kid's game.

Edit: misread the date and accidentally woke a two months inactive thread with very little to add. Oops. Sorry about that.
Keening_Product was defeated before the game.

After seeing those Dopefish images, I can only conclude that some things just weren't meant to look photorealistic. Ye gads, those eyes...and teeth...

...then again, everything about Daikatana was pretty frightening.

Also, "Shadows Don't Scare Commander Keen" in Doom Eternal was mislabeled. The song that plays when you select that album is "Spiro Grip Me Tighter", presumably because it was more "rocking" than most Keen music. Just throwing that out there!
Top
Post Reply
7 posts • Page 1 of 1