This is where you can post your Commander Keen related stories, artwork, or other stuff that is related to Commander Keen but otherwise doesn't belong in another forum.
Post Reply
1005 posts I think this must be the same girl. Be honest, PCKF, would you date her?

I would have a long chat with her if she would let me get anywhere near her, it being so rare to meet someone who has even heard of Keen.
I flermmed the plootash just like you asked.
Very silly indeed: https://audaxeundum.wordpress.com/
Top

I'd like to give a cool shout out to Matt/Ghostie for their cool keen fanart
They also have a cool ask blog featuring some more fanart. (which is currently on an indefinite hiatus)

I don't think he knows keen too much, but it's still really cool and dedicated that he draws fanart of him.
RESTING SPACE
EXPLORER FACE
Top

King_Gargs_Revenge wrote:I think this must be the same girl. Be honest, PCKF, would you date her?

Only if she got a Garg with an open mouth tattooed on her pussy.
Top

Is... is that Keen the hedgehog?
What you really need, not what you think you ought to want.
Top

Levellass wrote:Is... is that Keen the hedgehog?

Here's a little something I drew the other day. Not a huge fan of the proportions I gave him, as it kinda makes him look more like Billy is around 12-15 rather than eight. 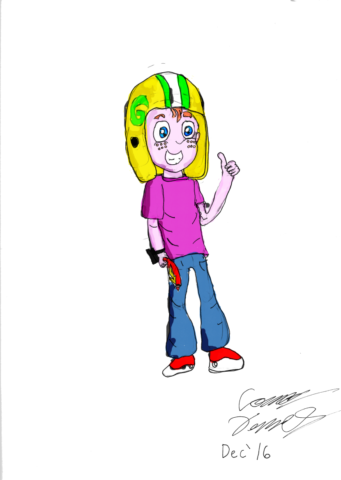 I think this is cool! You should do more art!

If you want, recommend me some famous quotes with potential to fit the Keen universe somehow. I might like to make some more images based on them, just for fun.

For example, here's one I was considering:

“If the American people ever allow private banks to control the issue of their currency, first by inflation, then by deflation, the banks…will deprive the people of all property until their children wake-up homeless on the continent their fathers conquered…. The issuing power should be taken from the banks and restored to the people, to whom it properly belongs.” – Thomas Jefferson in the debate over the Re-charter of the Bank Bill (1809)

“If the Vorticon race ever allows Vortimoms to launch a civil rights movement, first for their own equality, then against others' equality, the Vortiminists will vote themselves out of the kitchen and into the workplace until their children run wild in the streets and schools, in the loveless ruins of the nuclear family... The right to vote should be taken from the Vortiminists and restored to Vorticon Grunts and Elites, to whom it properly and exclusively belongs." - Vorticon Elite, spreading fake news during illegal rally of two members of the Alt-Right, moments before his swift arrest and execution for violence, treason, hate speech and thought crimes, in increasing order of criminal severity.

Quotes can be from anyone about anything, please recommend. This is the best thing I've seen in a long time.
I flermmed the plootash just like you asked.
Very silly indeed: https://audaxeundum.wordpress.com/
Top

Thanks! To be clear, however, I should mention that all I did was add the caption (that was Abe Lincoln, by the way). I'm not sure who the artist was, I saved the image a long time ago. Although it does have the artist's initials, I obscured them with the text not to try and hide that fact but simply because they happened to be placed directly in the way of where I wanted the text to be. I felt they would be a distraction, and I don't have the editing skills to move the signature somewhere else without distorting the background. I can post the original if anyone wants.

Yes! That image is exactly how I always imagined Billy Blaze would look like in real life.
I flermmed the plootash just like you asked.
Very silly indeed: https://audaxeundum.wordpress.com/
Top
Post Reply
1005 posts