Here is where to post about the latest Commander Keen fangame or modification you've finished, a new website you've made, or another Keen-related creation.
Post Reply
59 posts

Roobar wrote: ↑Fri Jan 04, 2019 6:45 Yeah like why everyone and everything want you dead in your neighborhood

I think the neighbourhood may be getting fed up with Keen. He does seem to break and enter into anyone's house he pleases - and even steals candy and energy drinks from them!

That Blaze boy stole all 15 energy drinks I had stored up on my roof!

Rumors about suspicious activity at the Blazes my also be running rampant through the neighbourhood...

"Did you see the Blaze boy with the one eyed green creature in his yard?"
"Yeah, the family claims they have a dog, but I've never seen a dog like that..."

"That Blaze boy has a spaceship - a spaceship I'm telling you!"
"Mr. Jenkins, did you forget to take your medication again?"
Top

Hi everyone! Here is the latest release which addresses a lot of the issues associated with crashing and includes added ammo:

I've really been enjoying reading everyone's feedback, thoughts and opinions on the mod. The overall positive reaction is definitely motivational and I'm just glad that people enjoy my work!

So I've cut down on sprites and unique tiles in the levels that were causing crashing and have been playing through the mod for the last couple of days. The crashing appears to have ceased but I will be interested if anyone has more problems with it!

I've added more ammo to the levels because yes it was definitely a bit thin in places! In the few days leading up the initial release I actually removed some of the "IF ammo" sprites at the beginning of levels due to restructuring so they're back in the levels that were lacking them.

There's also signs in front of the mid-level checkpoint exits so that the exit is more easily recognised. I've expanded the area for level entries so that it's less of a guessing game too.

The two problems that I haven't got around to tackling yet are the game over crashes and the loud music in a couple of the levels. The game over crashes may have something to do with the patch file so I'll need to talk to levellass about that. I'm not sure what to do about the loud music as this seems to be the way the IMF files were when I imported them into the game. I imagine that in order to drop the volume on them you would need to do it within the music or IMF editor. They seem to be double the volume of the rest of the music so this would just need to be halved.

I may go back in at some stage and edit some of the graphics that are difficult to distinguish from being in the foreground or background because this is an approach I've taken for Ocflore.

Thanks for the great feedback guys!

Bubbatom wrote: ↑Sun Jan 06, 2019 11:54 Hi everyone! Here is the latest release which addresses a lot of the issues associated with crashing and includes added ammo:

Awesome!
thanks for the update.

I do not only enjoy your work but love it so much, that I sat down the last couple of days and did nearly the same debugging steps you just mentioned.
so simultaneously I was able to address 150+ faulty (half/mistakenly animated) tile info properties. while fixing these, sprites aren't really the problem any more, meaning that I was able to keep "IF ammo" sprites for eg. (just in one level I had to adjust the number of sprites, I believe it was level 8 or 14.) To give an example "The Mansion" had a total of 107 animated tile types, and now has only 29!
next to that I had to reduce the number of unique tiles every level was equipped with. for e.g. I reduced the number of unique sward tiles, or things that shouldn't be noticeable by the player. in some cases I had to come up with some nasty tricks to keep the levels as close as possible to you original designs. again, "The Mansion" had a tile memory score of 741,6 now has a score of 698,2 (700 is the critical upper limit I believe).

in result I haven't got any "insufficient memory to play music" notes nor any hard crashes while test-playing it over and over again. I also gave this very test setup to Tesseract who also didn't encounter any crashes.

so here is a tweaked version of the game. all levels should be stable by now. at least that's what the numbers are telling me. but of course this mod is taking things to the limit, so there might happen something unexpected.

Things I haven't addressed yet are the savestate anomalies, the game over crashes and the loud music. for the music volume we do have some tools to even the loudness. but someone more capable of this task should take a look at this...

I think I may be able to help with the loud music, if Bubbatom wants to send me those audio files I'll see what I can do
Top

Here are those 2 louder songs fixed (golden house and sewer level). These volumes should be more equal to the rest of the game.

great! thanks a lot. I think two songs were also noticeably quiet. if you could, please adjust their volume level as well.

Nisaba wrote: ↑Mon Jan 07, 2019 8:39 great! thanks a lot. I think two songs were also noticeably quiet. if you could, please adjust their volume level as well.

Sure thing. Which ones were too quiet? I hadn't noticed any in game that seemed too quiet but I may not have played those levels yet. Playing back all the tracks in imf player snd1-200 sounded a little quieter so I'm assuming that's one of them but I'm not sure which other one?
Top

55Aavenue wrote: ↑Mon Jan 07, 2019 19:12 Sure thing. Which ones were too quiet? I hadn't noticed any in game that seemed too quiet but I may not have played those levels yet. Playing back all the tracks in imf player snd1-200 sounded a little quieter so I'm assuming that's one of them but I'm not sure which other one?

This is a lot of fun, great job! Definitely a treat to come back to PCKF and find this downloadable.
Top

Ok I upped the vol a little in those two. snd200 turned out pretty good but I'm not sure if 205 sounds any better. The problem with 205 is only some of the tracks are too quiet while others are not. Without having the original midi file and just the imf I can only increase or decrease the velocity of all tracks at once. I increased 205 a little but some tracks may still be a bit quiet, but pushing it any more will make some parts way too loud.

I thought 204 sounded pretty good as it is, I can't really increase that one anyway, if I do, the lead instrument will be way too loud.

...as promised, here the tweaked unofficial version 1.0.3. This is a tribute to BubbaTom's superb creation!
Download link: Suburb Shenanigans v.1.0.3

It's a cool game.I try it.There is a second mod.I wait it
Commander Keen in... Robot Attack!
Episode 13: The Ultra Omegamatic viewtopic.php?f=4&t=6802
Episode 14: Secret of the Sorcerer viewtopic.php?f=2&t=6837
Top

I have a stupid theory:

The main playable character (aka the player) is actually NOT Commander Keen/Billy Blaze!

See, on the timeline Commander Keen series are situated somewhere in the early 90s. Billy Blaze was born somewhere in the early 80s, growing up, living his life etc., until the games took place when he was 8 years old. That happened in 1991. This is a fact because Tom Hall/John Romero/John Carmack saw a young boy pogo-ing on the streets at that time, which instantly gave them the idea for the game. The first Keen game as we know was released on 14 Dec 1990. So we know Billy's age and in which year the things took place.

Yes, I know the games can still be pretty much situated in this year as well. And it will work well enough for sure. But given that Keen 1 was released in 1991 and is seen through Tom Hall's eyes (mostly) at that time, and the fact that the in-game story never mentioned which year exactly was the game taking place, we have but no choice to accept that the story took place in the very same year the game was released - 1991.

OK now looking at Suburb Shenanigans. We can see so many things that are not from the early 90's era. More specifically things like the big LED TVs, CFL light bulbs, robot vacuum cleaners... 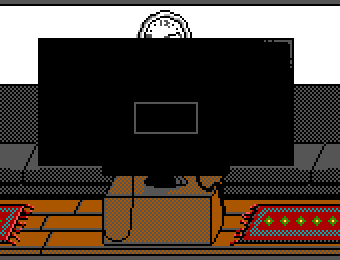 I mean look at that giant 85+ inch monstrosity! Large screen TVs were developing rapidly in the late 90s. Yes, there were some led TVs before 1991, but never at that size, nor they were any good or that popular.

Or look at that all-electric Chevy Bolt:

There are many solar panels on the roofs of many buildings. They were not that popular back then and were almost impossible to be found on people's roofs.

And look at this guy, playing with his Apple Watch:

Have a look at that Portrait. This is Barack Obama. There's no way any pictures of him would have existed in so many homes back in 1991.

This all suggest that the Suburb Shenanigans mod is indeed taking place in the much more recent years. More specifically, it's taking place in 2018. So what is the explanation of all that and how is Billy still 8 years old then? The answer is simple: that's simply not Billy Blaze!

Commander Keen, the main playable character in this game, is actually not the Billy Blaze we all know from the 1991, but is in fact the child of Billy Blaze named after his father. You see, Billy Blaze has grown up from 8 years old in 1991 to 36 years old in 2018. What we see and play with is his son, Billy Blaze jr, who now takes place The Commander Keen role from his father. The home is now Billy's own home, and his son, Billy Jr, is using his childhood bedroom. Susan Blaze is Billy's life. Coincidentally, she's also named as Billy's mother. The posters we see in the kids room are still standing ones from Billy's childhood. The retro computers/TVs are relics collected from local stores such as Goodwills by thrifts.

So yeah. In this mod we play as Billy's son, Billy Blaze Jr, and the mod is taking place in the year 2018.
More from me: Planet Cloudius IX | Jill 4 | Dave levels
Top

I can't believe it! As life goes on and I take longer and longer breaks from this place, I always come back to find something marvelous. I remember sending in music for this 5-6 years ago!

I just downloaded it and only had time to play through the first couple of levels, but even in that short experience I was blown away by the attention to detail and creative effort you obviously invested in this. I will definitely need to invest some real time in appreciating this work of art! Bubbatom, a lot has been said by everyone else in the thread, so I'll skip a long analysis in favor of a simple "well done!"