Here is where to post about the latest Commander Keen fangame or modification you've finished, a new website you've made, or another Keen-related creation.
Post Reply
18 posts

I've finished my beta playthrough of the mod. I have all my videos up and in the playlist now, and have added time stamps in the description boxes for when bugs show up to make them easy to keep track of (there were a lot of little things, and also more severe problems).
This was a good mod. I like the puzzle aspect of it, and it was usually pretty clear where to go. It really has that classic Keen feel to it. The story is also funny and interesting. I'll be looking forward to the sequel.

In Mount Meurglys there are several places where the background layer under foreground tiles does not match the surrounding background. In the level editors I've used there's an option to turn off the visibility of the foreground layer so it's easier to see the background, maybe toggling that will help draw attention to these out of place tiles so they're easier to notice.

The Mad Mushroom replacement is very difficult to deal with. In fact I've had less trouble with the Berkeloid replacement than those guys. Part of it is their hitbox seems to be as big if not bigger than their sprite (generally enemy hitboxes should be one or two pixels smaller than the part the player can see). Also even in the original game, their hopping pattern will randomly speed up (not sure what causes it exactly) and in at least one level (Air Quality Station) I was unable to pass one of them as it was sped up.

At some point there was a big lag spike where everything froze for a second. DOSBox's built-in recording function pauses when that happens (and thus it does not appear in the footage), so I'm not sure exactly where it was. :/ It may have been in Sewage Plant Upstairs.

There's a tiny edge of this slope that appears in front of Keen: 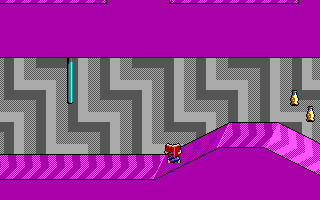 Also my brother insisted I mention that dark grey for some reason appears lighter than dark blue, so it doesn't work as well for shading there. (This is seen in Twisted Temple.)

Oh, one more thing: Back up your files if you try to switch to KeenGraph. In my experience of trying to use KG with the "Goodbye, Galaxy" set of games it was not very consistent about exporting the hitbox part of the sprites, and then importing them again they had real weird clipping issues because of that. As far as I've been able to find, this is just a glitch with KeenGraph, and requires manually reconfiguring all the faulty hitboxes which is a pain.
Besides ModKeen and KeenGraph, there's also ModID which can also deal with transparency in the tileset as a special colour.
"Friendly. Very friendly. Too friendly."

The deadline for suggestions for things which will be fixed in Version 1.0 of this mod is now closed. I will probably drop v1.0 in late May, but I also expect to do one more revision later in the year, so additional suggestions are still welcome.

I can't begin to tell you how much I appreciate the detailed feedback. I love how passionate y'all are about this.

If you tested this mod, and you would like to appear in the credits under any name other than the username you use on this forum, please let me know. ProYorp: How would you like your brother to be credited?
Top

He says he'd like to be credited as PandaKeen.