Here is where to post about the latest Commander Keen fangame or modification you've finished, a new website you've made, or another Keen-related creation.
Post Reply
7 posts • Page 1 of 1

So last year I decided to make a Keen mod as a birthday present for my little brother. After taking a look through it again, I decided it was of decent quality, so I figured I may as well release it, as it is a finished mod. Since by now my brother's had a good chunk of time with it all to himself... with his permission, here it is! 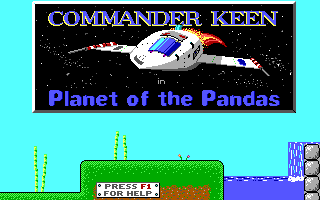 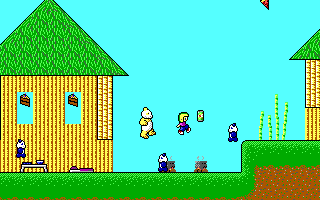 As it was meant to be a personalised mod, there's a few inside jokes scattered throughout the story texts that I don't feel like translating to Normal Speak, so don't be too concerned about the level of randomness you may find.

Happy Keen Day one and all!
"Friendly. Very friendly. Too friendly."

This is lovely! Finally some easy levels I can enjoy after all those tar pits I slogged through earlier.
On second thought, there's something unsettling about this. Not sure if it's how Keen jumps or if it's those costume-wearing yellow bears. Pull off that bear face and let's see who you really are!
I think your Keen death animation works VERY well. And that teleporter on the world map surprised me!

By the way, are you still working on the Keen2 Goodbye Galaxy: Secret of the Oracle mod?

Heh, well I tried to give Keen a "cool action pose" for the jump falling frame; since I figured that's one of the frames you're going to be seeing the most of, I wanted it to be interesting. It's definitely very different from the original (which seemed a bit stiff almost, so I tried to mix it up a bit).

In regards to the Keen2 mod... yes and no. It's something I think of doing every so often, but haven't really done any actual work on it in quite some time. I definitely do want to complete it (although I guess that's what everyone says, isn't it?

). I think the main thing is I want to learn how to patch well enough to accomplish the effects I'm after, which is a rather large undertaking and requires a lot of focus, and so I've been putting it off.

Although I was recently learning some things about coding in general, so that might make things slightly easier, whenever I do get around to that.
"Friendly. Very friendly. Too friendly."

troublesomekeen wrote: ↑
Fri Mar 15, 2019 9:15
This is lovely! Finally some easy levels I can enjoy after all those tar pits I slogged through earlier.

The first 3 levels are kids play, but than after these... It's getting pretty interesting. Thank you again, infinity lives patch!

You've put a nice little mod there. I was hoping to play a vorticons mod on the keen day, so you saved the keen day.
More from me: Planet Cloudius IX | Jill 4 | Dave levels
Top

I love it! A good thing you decided to let the rest of the world play it too. There's something so old-school about this one! Neat graphics; especially the sprite work (needless to say, the pandas are just adorable). It's nice to see effort was put into all aspects of it even if it was originally made for a very limited audience. Liked the ending graphics and the way it was sequenced.

I tried this out a couple days ago and did a KeenWiki article shortly afterwards:

It's a rather cute mod, I must say! I find it rather sweet that this was meant to be for your brother!

It reminds me of the Keen mods I've made way back then, before the Revenge of Mortimer trilogy was even a thing! I like the graphics and the simple level design is rather refreshing!
Quillax Ship - Where you can download all of my cool, keen mods and super-marvelous fangames!
Top
Post Reply
7 posts • Page 1 of 1