Here is where to post about the latest Commander Keen fangame or modification you've finished, a new website you've made, or another Keen-related creation.
Post Reply
69 posts

If you like the game, please give it a thumbs up. It really helps and supports the game. Thank you.

Version history moved down below.

G'day people! I've been developing this game with K1n9_Duk3. It has been in the works for many years and I was working on it in my spare time. Some of you may even have seen little glimpses of the development of it over the years. There were some ups and downs over that period, but in the end I hope we've managed to deliver a great experience! The development of the game is a project of mine that I'm glad it is finally ready!

Planet Cloudius IX features:
- 28 playable levels! And that number is without the world map and the secret levels! (36 is the total number of levels) Some of them are huge! Like 2 or 3 times bigger than the biggest from the original Keens!
- Many secrets, more than 1 secret level!
- New gameplay mechanics!
- New powerups!
- Vast world to explore!
- Dialogues!
- Checkpoints!
- Autosaves!
- A lot of enemies!
- A lot of goodies!
- New difficulty skills with health bar!
- New mode: Speedrun!
- Unlock-able content!
- Easter eggs!
- Native wide screen support!
- Window or full screen support! (not tested on ultra wide though)
- Controllers support! For example, you can set your Xbox controller and play with ease!
- VGA graphics (you need 3DFX Voodoo2 12mb to handle so many colorz!)
- Parallax background support!
- Plenty of music tracks and sound effects!

KEENGINE allows you to:
- Create big levels with a map editor! 5012x5012? No problem! (that's really huge though. It would take ages to create such giant map).
- Create huge tilesets with an easy to use tileset editor!
- Create as many actors (sprites) as you want! And place as many as you want. Create your own actor (enemies, items, scenery) by simply editing text files!

KEENGINE supports:
- Aplhablend for transparency. You simply draw and save in PNG file and you're good to go!
- Lua scripting. Lua scripting allows you to create cut-scenes, mini games for the wrist-watch, complicated than usual dialogues, modify scripted actors and level behavior, and much more.
- Many sound/music channels

These are some of the features, but not all...

I want to thank you all for all the support over the years. Also, in the game you may find some familiar art or assets from various contributors over the years.

Huge thanks to K1n9_Duk3! He spend a lot of his free time in developing the most advanced keen engine ever! It has been a long way of countless improvements from the initial versions of the engine to where we are today. Without his dedication this would not have been possible! The men's a legend! Thank you, K1n9_Duk3!

What's new in v1.1.1:
- Updated to KEENGINE v0.63.0.
- Jake now can land more easily on top of the left and right edges of single tile platforms. This can help in some hard sections, where players use to fall often when trying to land on small platforms.
- Fixed a bug where you could have fall through fast moving platforms with your pogo, while you were not supposed to.
- Fixed some issues where the player could get stuck temporarily on the edge of some tiles on the world map.
- Other internal engine improvements that came with v0.63.0
- Added an optional icon, if you would like to have an icon on your desktop.

What's new in v1.1.0:
- New level: Escape the cave (very hard)
- New music track
- Several new graphics
- Mushroom village: changed "pressure" to "precious" in a dialogue from a blue villager.
- Mushroom village: if you skip through the computer hacking thing, the long internet noise can play after the conversation is finished. Now it is cut off when you move on to the next step of the event.
- Fixed a water in Jungle Caverns that didn't hurt player.
- Fixed several tiles in Jungle Caverns and some few other levels.
- Fixed a subtle checkpoint animation. It was a bit off.
- Ghosts on the world map can now escape.

What's new in v1.0.14:
- Raatlet quest in the Mushroom Village now gives more ammo as a reward, when completed on hard difficulty.
- If you turn on and off a switch in the sewers several times and look up, it will now drop an additional 5 ammo (on any difficulty).
- Several small tiles and actors adjustments in Secret level 4, Darmondia level 5 and 6.
- Several tile fixes in Ancient Ruins and Misty Hills.
- A little improvement of the sound when collecting several gold items at once.

What's new in v1.0.12:
- Fixed a “troll” checkpoint in Jungle Post that used to kill the player after re-spawning from it.
- Fixes in the 1up secret level: fixed a platform on which you could use the op pogo jump to reach a place that was not supposed to be reached by without using a switch and turning on the platform first; moved a small secret area; adjusted several background tiles; more enemies and ammo on hard and more rooibos teas on all difficulties added; adjusted dialogue.
- Small dialogue adjustments of a secret character in Ancient Ruins.

What's new in v1.0.11:
- The Slimer (that green flying thing in the jungle levels) now can hurt the player. The original idea behind this creature was that you were supposed to pogo onto it to get an extra high pogo jump, but K1n9_Duk3 never actually implemented that.
- Added a dialogue and additional frames to an actor in a secret level, as well as several small changes in that level.
- The computer joke in Mushroom Village can now be executed only once.
- Added a new switch in Ancient Ruins that toggles some vines next to it.
- Several tile fixes and/or small additions in 7 levels (ctdarmondial03, ctdarmondial08, ctsecretl04, ctjunglel02, ctjunglel06, ctjunglel07, ctjunglel10) and refined the hard difficulty in 3-4 of these levels (now it's a bit more challenging in these levels).

What's new in v1.0.10 since v1.0.8:
- Sandy Tower is easier on one particular goplat section.
- Fixed a “troll” checkpoint in Jungle Post that used to kill the player after re-spawning from it.
- Several fixes in one secret level: fixed a platform which you could have used the op pogo jump to reach a place that was not supposed to be reached by without using a switch and turning on the platform first; moved a small secret area; adjusted several background tiles; more enemies and ammo on hard and more rooibos teas on all difficulties added; adjusted dialogue;
- Small dialogue adjustments of a secret character in Ancient Ruins.
- Fixed the background in Guard Post 1 to parallax scroll horizontally.
- Several small tile fixes.
- Fixed a secret within a secret in Guard Post 2, so it now works as intended.
- Changed one bit of a secret within a secret level, so you won’t get stuck.

Ah, yes. The familiar loading screen of the Commodore 64 cassette version of Keen Dreams. It would always hang right there after 5 minutes and had to be loaded again from the start several times. It had a great soundtrack, pity it had to be cut from the PC version.
INFORMATION SUPER JIMAGE - Commander Keen Mods on Facebook
Top

oh I love it.
I wonder if it is possible to reproduce this star gliding effect with the Keen Engine... 'd be neat
"We have come to conquer you all and bring you lots of candy!" | about me | my current project: play Keen mods on a GameBoy |
Top

I spent five minutes and twenty-three seconds waiting for the Apogee logo to appear.

Some of you were wondering what was all that about. No more! Over the past few days I've been preparing this project for a public release. So there you go! The secret project is revealed!

Only proYorp has managed to get most, but not all of all the clues that I've been giving you over the past few days in this topic. Congrats!

Now, there are plenty of secrets to explore in this game! I hope you enjoy!
Top

I'm already in love with the screenshots you've posted. Can't wait to get home. Gotta test things out, that's for sure!
"We have come to conquer you all and bring you lots of candy!" | about me | my current project: play Keen mods on a GameBoy |
Top

Aaaaah I remembered seeing the development thread for this! I should've gone back and looked at it, you even put the title in there! That would've explained the cloud picture! Everything makes sense now!

I see this whole scavenger hunt thing also ties in with the game's story: 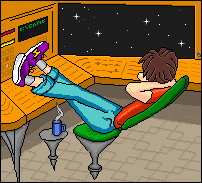 Well, that was fun.

I've played a couple of levels so far. The dynamic sound effects for the waterfalls is cool (a tiny bit loud though considering it's background), as well as the NPC dialog, the horizontal poles, just a lot of neat little new features. The doors in the Deep Forest were a bit confusing at first, since they didn't have their gem holders right next to them. I managed to figure it out, but I feel like the first couple of levels should have the doors and gem holders next to each other so the player can learn what they look like.

Interesting choice, using an original character rather than Keen. Was this done to be able to open the game up to a wider audience beyond the Keen community, avoiding cease-and-desist?

Does this use the default VGA palette for the graphics?
"Friendly. Very friendly. Too friendly."

Hah. I'm glad you figured this out!

This is not a Keen mod, but a KEENGINE game and is not using any palettes. Basically, no limit of the colors at all.

BTW on what difficulty are you playing?
Top

proYorp wrote: ↑
Thu Apr 18, 2019 19:59
Interesting choice, using an original character rather than Keen. Was this done to be able to open the game up to a wider audience beyond the Keen community, avoiding cease-and-desist?

Does this use the default VGA palette for the graphics?

Yeah, this game went through many changes over the years. The oldest Demo I got to play still had tons of Keen assets and was called "New Commander Keen", but that was way back in 2011.

By the way, the graphics don't use VGA, nor do you need to mess with any palettes at all. You can limit your graphics to a 16- or 256-color palette if you really want to, but the graphics use True Color images with Alpha Blending anyway, so you have basically no color limitations in this engine.
Hail to the K1n9, baby!
http://k1n9duk3.shikadi.net
Top

I'm getting an EXCEPTION_ACCESS_VIOLATION error under both WINE and Windows 7 VM.

log.txt (same thing for both):

Any chance of a Linux port at some point or is it all DirectXy?
INFORMATION SUPER JIMAGE - Commander Keen Mods on Facebook
Top

Try editing keengine.ini by changing some of these:

Commander Spleen wrote: ↑
Fri Apr 19, 2019 0:16
I'm getting an EXCEPTION_ACCESS_VIOLATION error under both WINE and Windows 7 VM.

Could you try running the game with the parameter /log=all and see if the log file shows some more information?

I'm not sure why, but the game appears to crash before starting the graphics mode, so maybe creating a KEENGINE.INI file with these settings might help:

The engine is written in BlitzMax, which has compilers for Windows, Linux and MacOS. When I release the source, you should be able to just build and run the code as-is and create a native Linux or MacOS program.
Hail to the K1n9, baby!
http://k1n9duk3.shikadi.net
Top
Post Reply
69 posts