Here is where to post about the latest Commander Keen fangame or modification you've finished, a new website you've made, or another Keen-related creation.
Post Reply
81 posts

...and I just passed the beach level... just takes time and careful attention paid to the arrows (without them Jake would be fucled)
Top

And another question.... when Jake goes for a giant burger, can he somehow remove the sewer lid and explore below?
Top

Any hint as to how to get to the dude sitting on the loo in Mushroom Vilage(sic)?
Top

Dude, why would you want to get there in the first place?

I have a dunny/loo fetish!

I have not found a single secret level yet

Damn i have so many more questions but i don't wanna be spoon fed the walkthrough!

Thanks! Btw the secret agent levels are two of the secret levels, so technically you've found at least two.
More from me: Planet Cloudius IX | Jill 4 | Dave levels
Top

So I've been exploring a bit in Ancient Ruins and would really love a hint as to how to get to that dang switch tucked deep in the earth to the right of the green gem!
Top

Fleexy can you add spoiler code to the forum?

One of the major complains is about the hard difficulty when it comes to landing on single tile platforms. Players often fall while trying to land on the edge of these blocks. Fortunately, K1n9_Duk3 has come up with a solution to this. It is called "LandTolerance" value and it acts similarly to the Galaxy keens.

For example, here's how it used to be previously:

This really could help a bit in some sections of the game that people tend to "love" *cough* the parkour level *cough*.

Here you can see that something similar is happening in Keen 4. See how Keen moves a little bit to the left when landing? Like he's attached magnetically to the block (that's not me pressing the left key when landing):

That "magnetic" alignment is not present in Keen Dreams.

This improvement also makes it easier to jump into very narrow passages to the left or right as well. For example, this secret to the right previously was hard to find, but now is easily accessible: 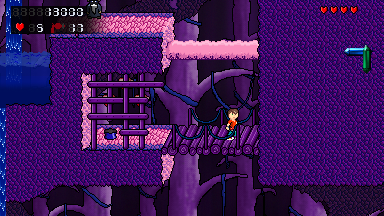 Also fixed is a bug where you could have fall through fast moving platforms with your pogo, while you were not supposed to. For example, this one:

Now you can't fall through fast moving platfroms with pogo.

Fixed some issues where the player could get stuck temporarily on the edge of some tiles on the world map.

The new version v1.1.1 is available to download. So far we haven't found any issues with the implemented changes to the engine in the game, but anyone can feel free to report any issues. Thank you.
More from me: Planet Cloudius IX | Jill 4 | Dave levels
Top

Personally I have not really had any issues with jumping on the 1 tile blocks or jumping in general. I did notice that the Impossible Pogo Trick does work slightly differently than in the Galaxy games. In Galaxy it is nearly impossible to do the IP when standing still and poging straight up. You have to do it at an angle. Even when you can do it, you will never get the extra height the IP gives you. This can be done quite easily in PCIX. In Galaxy I can do the IP almost every time. It is sometimes a crapshoot on PCIX. Obviously I just need to practice it more.

One other thing I did notice is the smoother scrolling in PCIX can seriously screw with you, if you play this mod for way too long, then try to play the Galaxy games. When I first downloaded this I played it for half a day, almost every day for weeks. First Galaxy game I played after (AR) and I couldn't even pass a single level, even on easy, the less smoother scrolling had me so screwed up. So you guys should keep that in mind when you transition back and forth from PCIX to Galaxy and vice versa.
What is Directive X_M?
Top

Syllypryde wrote: ↑
Fri Jul 19, 2019 20:37
In Galaxy it is nearly impossible to do the IP when standing still and poging straight up. You have to do it at an angle. Even when you can do it, you will never get the extra height the IP gives you.

Having worked with the original Keen:Galaxy code (or at least the closest approximation available to us right now), I have to say this is not quite true. Even though the code that initiates the pogo mode while walking isn't the same code that would be used while standing still, it's still semantically equvialent to it. So both the standing and the running pogo jump should always result in the same jump height.

For those who find the impossible pogo trick hard to pull off in Keen:Galaxy games, you can just press the jump key and keep it held down. Once Keen has finished the initial jump and lands on something solid again, you can just hit the pogo key (while still holding down the jump key) and you'll get the impossible pogo jump height every single time.

I think the biggest difference between the timing in Keen:Galaxy versus PCIX (or any other KEENGINE game) is that KEENGINE runs at 60 frames per second, while the original Keen:Galaxy games only run at 35 frames (or less) per second. That means the time between each frame is almost cut in half in KEENGINE compared to the original games. Perhaps there was a way that would have allowed for slightly more forgiving timing in KEENGINE, but I couldn't think of a way to implement that when I wrote the code. Any changes I make now could probably break some of the existing level designs, so I think it's best not to mess with it.

But here's an interesting little bit of trivia for all of you: German keyboard layouts have a key named "AltGr" instead of the right "Alt" key. This key basically works as a combination of Ctrl+Alt for certain key combinations. For example, the @ symbol is on the same key as Q on German keyboards and you need to press Ctrl+Alt+Q to type that symbol. Or you just press AltGr+Q for short. As you should be aware, the Ctrl and Alt keys are also used for Jump and Pogo in the default key bindings of KEENGINE and due to a bug in the keyboard handling code (a bug in the programming language, not KEENGINE per se), you can use the AltGr key as an instant impossible pogo key in KEENGINE. And since I'm using German keyboard layout, I might have an unfair advantage here.

In KEENGINE, you can't just hold down the jump key like described in the Keen:Galaxy exploit above, but you can edit the configuration file (keengine.ini) and set the secondary jump and pogo keys to the same key code and create your own dedicated impossible pogo key that way.


And yeah, the 60 fps in KEENGINE versus the 35 fps of the originals is part of the reason why KEENGINE games have smoother scrolling. But I think one of the more important differences is that shooting is always done without any delays in KEENGINE. In Keen:Galaxy, you have a short delay between hitting the fire key and the shot being spawned in-game. And on top of that, there's an additional delay between the shot being spawned and the next moment where the game allows you to shoot again. That means hitting the fire key five times in quick succession won't always spawn five shots in Keen:Galaxy. KEENGINE on the other had allows you to fire as fast as you can hit the fire key. That might also be a factor you have to adapt to when switching back and forth between KEENGINE and Keen:Galaxy.
Hail to the K1n9, baby!
http://k1n9duk3.shikadi.net
Top

Is the music available for download anywhere, or is there a way to extract it from the game files?
Top
Post Reply
81 posts