by troublesomekeen
Work has finally resumed on a project that's been teased years ago. It's that picture in my signature you see down there. "Coming Soon" indeed! But I mean it this time! There's been a number of exciting projects out there, like turning the first three Episodes (Vorticons) of Keen into Galaxy style, and we've even seen the reverse, Galaxy into Vorticons. There's even whispers about a KeenDreams mod in the style of Keen5. But what have we here?

The idea here is to recreate (as faithfully as my meager skills allow) Keen Dreams in Keen4. This means "adding" music, edge-grabbing, pogo and other good things from Keen4 to the Dreams experience. As I've worked on this mod, I've come to desire something more than just a recreation. It has turned into a sequel of sorts. The Canteloupe Quest is about seeing the remains of the Chain Gang back home. Chain Gang? Yes, yes. The other children trapped in Tuberia. It's a shoe-horned tale that takes place immediately after the demise of King Boobus Tuber and before Keen flicks the Dream Machine switch. At least that's how I understand it in my head. It'll probably change a bit when I get to the text-altering stage of this mod. For now I'll be rebuilding levels and adjusting difficulty.

This mod is an ode to some of the greats which had made this mod possible: Levelass, Gridlock, Ceilick, CyberZero, Dr.Collosus, Bernie, lemm and the creators of NetKeen. It's only one level so far but I feel like we're half-way there. My main hurdle now is understanding and adjusting sprite spawn height so that I can reduce the size of the sprite frames to save memory space (using Abiathar and KeenGraph for this project).

I'm still a rookie at the Release Forum having only finished one mod thus far. Let me know if I've bungled the download link by not including the necessary files to play the game. It should be as simple as running the Play.bat

I hope you, the reader, will give this a try. But I must warn you, with all the surprises and added dangers, I find it extremely difficult to beat. I've only tested this level on Normal, so watch out for that (also some creatures ignore Difficulty like the Bounder which is now a scary bouncing creature). Hopefully this is completed by Halloween because I've got a pile of projects backed up a mile wide.

by Roobar
Cool! When viewing your signature, every once in a while I was thinking what has happened to it. "Soon" lol? But good to know it's coming along well. Gonna play it soon. 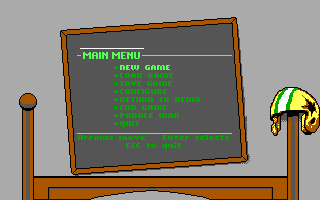 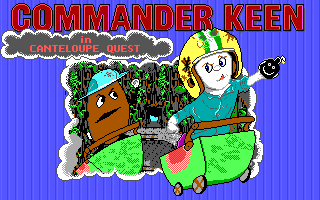 what a nice patch file. I even managed to beat the demo level. took me quite a number of attempts but I eventually learned how to bypass every hazard and threat. oh boy, those creatures have driven me crazy. really a lot of unexpected enemy behaviour out there. but somehow I love 'em. they are so adorable. lot's of neat ideas and brutal veggies.

maybe unintended, but the demo at the beginning is fun as hell. I really do wonder what Keen is up to? strange things he's doing while dreaming

by Nisaba
PS: dunno if you are interested in such thing but this patch might be nice to have: http://www.shikadi.net/keenwiki/Patch:L ... yle_window


In other words:
pls gimme more! I need this mod so bad

Congratulations on the progress. Must be satisfying to get to release something you've been working on for... how long exactly has this been a thing? I think that's been your signature since before I joined PCKF.
Could we hope to also see the mods referenced in your user icon?

Well, I played it. Was quite an experience.
https://youtu.be/LQED6GHZumQ

It was going smoothly until I ran into a suit of armor that had spontaneously decided to attack me. Then all the suits of armor I'd previously walked past with no problem suddenly gained sentience and I was trapped at the start that I'd just wandered out of so easily before. I had to wonder if this was some sort of Levellassian magic wherein the more times I lost the harder the level became.
Eventually I was able to get out of the start again, make my way back up to the suit of armor that started all this trouble and after some trial and error passed it and the horde of enemies near it only to find... No! I need a key to progress! There are two keys. Better grab both of them to be sure. Wait they're both Yellow Keys? Hmm. Made my way back up to the door when suddenly
KEYHOLDER POINTS TO A BAD SPOT!
NULL POINTER ASSIGNMENT
Well that was anticlimactic. I reload my game and try again... but it happens again! However this time I notice something. Keen is trying to put a key in a holder even though the door is already open. Next time I jump over the spot where I think it happened, and! The game doesn't crash! Finally I can beat the level.

The moral is you can never quite trust stationary suits of armor, and there is a second invisible key holder which leads to nothing immediately behind the first door. Also the corner of the floor there is missing.

by Roobar
Yeah, I was experiencing that same crash as well. Overall I like the idea of Keen Dreams Galaxy mod because I like edge grabbing and the ability to use pogo.

proYorp wrote: ↑
Sun Mar 15, 2020 5:59
...Must be satisfying to get to release something you've been working on for... how long exactly has this been a thing? I think that's been your signature since before I joined PCKF.
Could we hope to also see the mods referenced in your user icon?

Well, I played it. Was quite an experience.
https://youtu.be/LQED6GHZumQ

For more signature fun, check out this thread

Gingersnaps! Thank you, folks! I must investigate the keygem holders. I should have run Fleexy indispensable Tile Inspector. THANK YOU for the video! I would have otherwise been very confused how to fix this problem. I accidentally forgot to remove the old keygem holders from a previous version that has Keen starting at the end point and beating the level backwards. This is what happens when Keen runs over a keygem tile without that holder tied to a door to open. Not sure how you managed to get back those bad tiles! Maybe you jumped over them.

Is it possible to hold two keys in Dreams? Because this is the way the original level is designed. It doesn't quite work in Galaxy. I will either change the keygem color or move the first door location.

Thanks! I forgot about this patch. Wasn't it used in a mod recently? I already forget which one. I likely won't end up using it though.

by Nisaba
sweet! thanks for the quick update.
I hope to see a second level sometime soon-ish. this interpretation of Keen Dreams is full of surprises and so much fun. Keep it up!

same goes for the knight's armour. sometimes it appears in front of Keen, other times not...

by Nisaba
oh man, I love these Tater Troopers. They might be dumb as hell but it looks like they have an utterly good time. I wish I could join them

how is the snow? and what about your update plane?
this project is just skide godt. I enjoy it so much. really looking forward to further news and insights

by troublesomekeen
Thanks! The snow is snowing, wind is blowing. Unfortunately it wasn't enough to keep me snowed in for Mort Day, but now I'm housebound for other reasons.
Here's a bit of insight. We know that Dreams doesn't have the Stunner, Pogo or Ledge-Grabbing. But you know what else it doesn't have? Doors. No, not the keygem doors. I mean the kind you stand in and press the Up key to go inside, like Keen does when standing outside of those strange stone houses in the Shadowlands. Doors! It's literally teleportation. Dreams does not have a tile property like that. This means I can made Doors into whatever I want since Dreams Levels don't have this mechanism. Now then. Keen is 'teleported' to Tuberia through a dream or a nightmare with veggies on his mind. This takes Keen from his bedroom and puts him in another place. The fascinating thing is the chain gang--the other kids who are trapped in Tuberia. It's like they are sharing the same dream. If dreamers from all over the country share a space in the same dreamworld, that makes their beds the teleporter. Now in the official text of the KeenDreams story, as soon as Keen flicks the Dream Machine Switch, everything goes hazy and Keen wakes up in his own bedroom. But I propose that after Keen turned off the Dream Machine he must adventure back to where it all started on Hilltop Bedsite and close his eyes so that he can wake up in his own world. Still with me? A few of you who have broken down the barriers and explored more of the Overworld in this Demo have seen a few curious sights. Maybe the Tater Trooper Fair? The Kumquat Chasm? Or indeed maybe a few extra Bedsites. The other children had to have come from somewhere--just as Keen did. With the Dream Machine turned off, these other beds would start appearing as portals for each child to go back home. Now I wonder what happens if Commander Keen, curious inventor chap that he is, were to sneak out of Castle Tuberia, after the reign of the King was put to an end, and climb into someone else's bed? Keen might wake up in a different neighborhood. And here I have these lovely Keen4 door tiles...

by Nisaba
oh, I love this idea. I really love it. yeah, gimme gimme gimme dream-portals which teleport to random Hilltop Bedsites. I'm curious to know where our snoopy explorer fellow is about to sneak in next. this sounds like a lot of fun. I mean, maybe, just maybe the suburbs Billy was walking around aren't his true neighborhood but someone else's... who knows?
be honest guys: who didn't dreamed of sneaking into someone else's home and secretly doing some innocent shenanigans?

but wait a minute. An idea just occurred to me. Wouldn't it be neat to make this a community mod where the fine people of this forum contribute one single level each, which shows of the interior of their child's room. or at least create a place you guys would love to have had back then as your secret backyard tree house or something...

c'mon! this needs to be done, don't you think?

by banana
This is really fun. Keen Dreams has always been kind of awkward to me, the concept and level designs are fun and I love the flower powers and enemies, but the controls are just too awkward and I can never really control Keen well in it like I can in the Galaxy games, and this gives me that control back. Only trouble I had was the portion with the evil tomatoes in the optional rightermost section, for some reason I can't properly fire upwards through the pole opening to get them. I do really like the bombs you throw going in an arc instead of the straight shots from the neural stunners, it makes the aiming a tad more challenging. Some of the enemies are really surprising and I died quite a lot here.
All times are UTC
Page 1 of 1