Here is where to post about the latest Commander Keen fangame or modification you've finished, a new website you've made, or another Keen-related creation.
Post Reply
6 posts • Page 1 of 1 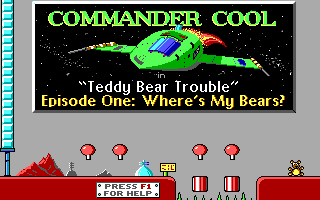 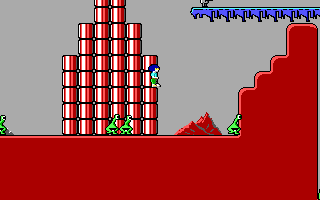 This Keen 1 mod started back in 2014 as a levelpack entitled "Back to Mars" and was later changed to star my original character. There were several long hiatuses in production.
In this mod, you play as Commander Cool as he explores Mars trying to retrieve his teddy bears, which were stolen by the Martians.

This is a public beta, and feedback will be much appreciated so I can make this better in the release version.

congrats! what a neat mod. nice to see fresh ideas
how come you decided to put the pogo in several levels? this is indeed an interesting choice and prevents from ending up in dead ends. 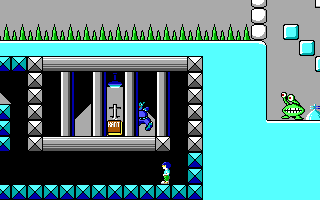 and as always:
happy modding
"We have come to conquer you all and bring you lots of candy!" | about me | my current project: play Keen mods on a GameBoy |
Top

Sounds like a tribute to the original Keen1, which likewise had more than one pogo stick.
Top

Here are my thoughts: This mod is really neat! A lot of things done right.

1. Right from the beginning with asking you whether you would like to use two button firing or not (all keen vorticon mods should have this).
2. And I like that you have unlimited lives (I know exactly for which level these two patches were meant for).
3. Gradual difficulty (easier levels at the beginning, harder at the end).
4. The best usage of bridges I've ever seen in a vorticon mod. And you've used these a lot and some in clever ways.
5. The overall design of the levels.

Though, I don't know what's the idea behind so many pogos. Maybe some kind of an award?

That being said, there are 3 really hard levels. And I think you know which levels I'm talking about. The last one I didn't even manage to beat! Dude, you should lower the difficulty of that one. The "late" one is really hard, but neat. Probably the best hint in the game was the colorful city or whatever was. Without it I would've probably missed. I've spend a lot of time trying to beat it, but it's really hard and too long. Too much for my taste. Good challenge though. If Keenrush was here, he would have loved this mod.
More from me: Planet Cloudius IX | Jill 4 | Dave levels
Top

I think because back when this was "Back to Mars" you started with a pogo but then when I changed the protagonist the starting pogo was removed and I probably wanted to make sure the player would have a pogo by a certain point.

I consider this mostly done, except I want to revise the levels.

@Roobar: What part of the final level were you having trouble with, and what do you suggest I change?
Top

There's the above part, where there are a lot of spikes that needs plenty of precision jumps, just to turn on a bridge. Make that part easier. It wouldn't be that bad, if the rest of the level was easier, but it's not. There are two ice cannon part, which I get it. You have to be precise and act fast. But it's annoying if I make a mistake. But then, there's another ice cannon later. And if you fail that part, you'll have to make it all over again. I don't know. IMO there are too many things you should be extremely careful not to screw. Yeah, it's the last level and it should be challenging, but it's too much at least for me. Maybe if I spend more hours, I'll beat it, but for now I'll leave it because I'm tired of trying.
More from me: Planet Cloudius IX | Jill 4 | Dave levels
Top
Post Reply
6 posts • Page 1 of 1