Commander Keen in: Break the Targets!

Here is where to post about the latest Commander Keen fangame or modification you've finished, a new website you've made, or another Keen-related creation.
Post Reply
15 posts • Page 1 of 1

Commander Keen in: Break the Targets!

Hello fellow Keeners! I've been lurking on here for a bit now, first of all I want to say this is a mighty fine community you've got here. I'm sad to see it's not as active as it once was but I think that's common for forums these days, especially ones primarily made up of adults with adult lives. I've played a few of the mods and so far my favorite is Atroxian Realm! I'm a big fan of the puzzles that Gridlock was able to incorporate with the limited features of the engine!

I want to finally share a fangame that I've made in Unity. I started learning how to use unity as well as coding in general at the beginning of this year, using Keen galaxy as a template to learn from seeing as it was one my favorite of the games I grew up with in the good 'ol 90's.

So what I've done is strung the first three levels of keen 4 together (including the bean w/bacon megarocket level) without enemies, hazards, or moving platforms. They're not perfect copies, but they're pretty close. This game's main purpose is as a kind of demo for me to add features to until I have the functionality I need to make the fangame that I plan to make, but seeing as it stands on it's own as a simple time attack, super smash bros style "break the targets" game I figured I would put this in the release forum.

To anyone who downloads and plays the game: I would be so so incredibly grateful if you could leave your opinion on how closely I've been able to mimic the feel of the Keen Galaxy games as well as any bugs you run into! Feel free to go into as much detail as your willing to, the more feedback I hear the better I can make this!

To help aid myself in cleansing my game feel palette so to speak I'm going to take the next few days to a week off of this project and spend all my free time playing the awesome looking mods around here! That way, when I come back to this I'll more easily be able to sense any differences between this game and the originals. On that note, there are some things I want to list to save people the time of pointing out things I am aware of:
Controls:

Also, Unfortunately I have yet to learn how to implement a menu system so In order to restart you have to close and reopen the game.

Granted, I'm the one who placed the targets and I've run through this a lot, see if you can beat my best time! I tried my best to place the targets in a way that allows for the optimization of runs.
Current best time:
1min 47sec

Thank you so much for your time and have a wonderful day everyone!
Last edited by Trevor_trev on Thu Sep 24, 2020 8:53, edited 1 time in total.
Top

Welcome! I'd say it's impressive what you've achieved with Unity. I think this is the first demo of a Galaxy implementation made in Unity. Some people were saying they were going to do it in the past, but no one delivered. Until now.

I'd say gameplay wise it's rough around the edges and still needs polishing, but I think so far you've managed to make it feel really keen-ish. I won't dive too deep into what issues I've experienced as this is an early build demo and I'm not sure what your long-term goals are. I'd say that the pogo and impossible pogo jumps feel satisfying. Shooting on the other hand, feels unsatisfying.
More from me: Planet Cloudius IX | Jill 4 | Dave levels
Top

Hey thanks! I would actually love if you went into detail with issues you found. I'll make sure to add that to the op.

My long term goal is to make a keen galaxy feeling game with added features and more "modernized" gameplay and level design that emphasizes exploration and combat, still keeping platforming in the gameplay loop but with less emphasis as the originals. I'm basically looking to make a keen metroidvania.
Top

Is there an original post which is somehow deleted or concealed?
Top

Yeah, I got notified about a new topic but I didn't find nothing
Commander Keen in... Robot Attack!
Episode 13: The Ultra Omegamatic viewtopic.php?f=4&t=6802
Episode 14: Secret of the Sorcerer viewtopic.php?f=2&t=6837
Top

The original post was edited after being approved, which caused it to vanish back into the pending-approval state. Welcome to the PCKF, Trevor_trev! Your account is fully activated now, so weird things like that won't happen again.

Yay! Thanks for the warm welcome! I'm hoping to eventually make a development thread for the game I'm working toward as well, but I'm going to wait until I've fleshed Ideas out a bit more. I've been putting all my time into learning Unity and coding that I haven't put much into the gameplay/level design or story beyond basic ideas.
Top

Finally Keen has made it to Unity aswell!

A project for lifetime.
Top

I would be happy to oblige! I even got some cool action shots! 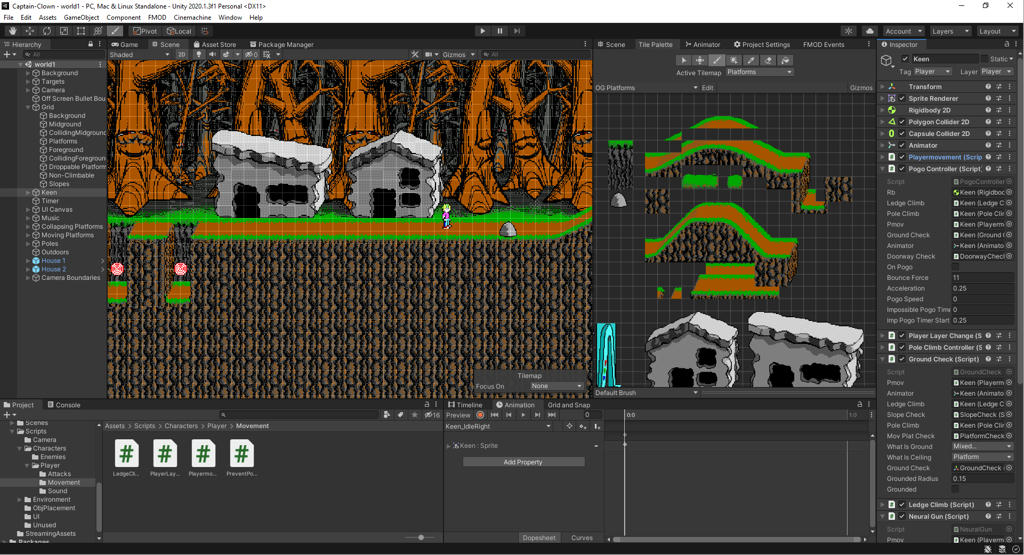 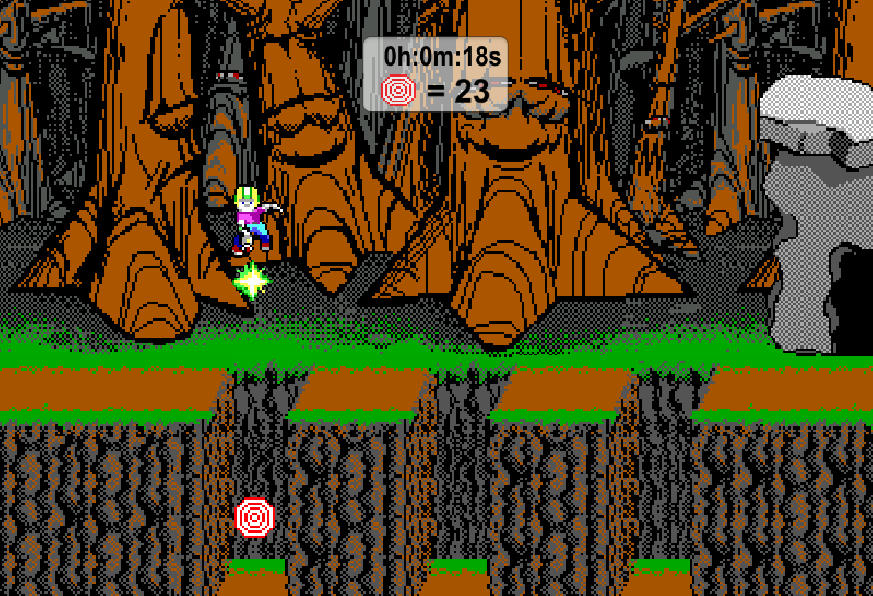 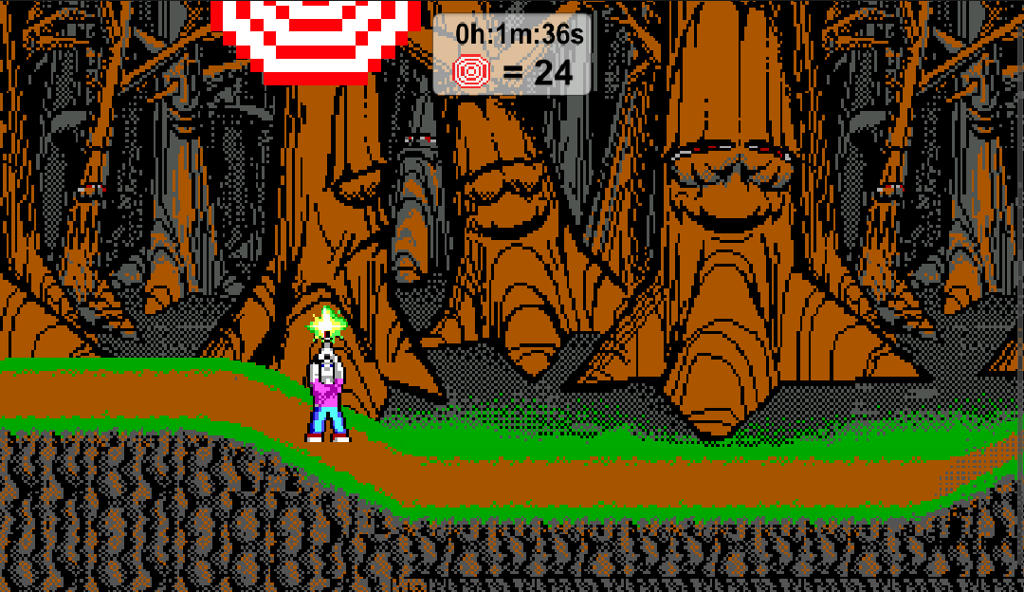 As if that wasn't enough, Here's a video of me doing a complete run! This video not only shows how to break every target, it also features:
Video:
https://youtu.be/4-OH-OJrTGA

As per Roobar's comment, I looked into the shooting mechanics and believe that one of the main reasons it felt so off was that when shooting while running keen would keep moving for a split second after the shooting animation started, so he would do a kind of slide just before shooting, and the other main reason being that the timing of the shooting sequence was off. The sequence basically goes like this:
Shoot button pressed >>(If running, Keen stops >>) Keen raises gun >> bullet appears >> Keen lowers gun (>>if run button is held, Keen begins running).
Each of the stages in the shooting sequence has a small amount of time between them. Due to me knowing nothing about Keen Galaxy's source code, I have no idea if it measures that time in frames or real time. For my code, I measured it in real time. In order to improve the feel and more closely mimic the original games, I recorded myself firing off 10 rounds in keen 5, calculated the average time between each stage in the firing sequence for each shot, and set the time intervals in my code accordingly.

I'll try to upload the improved version in a few weeks, when I'm done implementing doorways and building the rest of the levels (insides of houses and whatnot) that the doorways lead to. I may just create a development in the unofficial games board and share my plans on where I want to take this project. Thanks for checking this out everyone, have a great day!
Top

Part of me wants figure out how to put all of the levels together in an open fashion, but there's other things I want to put my time into with this project. At some point I'm going to release all of my code on github with instructions on how to put it together so other people can use it as a no-limits level builder, maybe someone else will undertake that task.
Top

Happy Keen Day everyone! I'm super excited to play everything that's coming out!

Version 2.0 is out now! Things that I've added/improved:

-Improved the timing of the shoot sequence to get rid of the weird slide and feel more keenish.
-running animation is now more similar to the original.
-50 Targets total!
-Added the ability to walk through doorways.
-Added Moving platforms.
-Added the blue key gem in the perilous pit.
-Added a main menu and a pause menu.
-Added the ability to create your own control setup.
-added the thumbs up loading screen
-Added a rudimentary trophy system.
-The game now keeps track of your best time.

As always, let me know what you guys think. If you find any bugs or if something just feels off, anything at all!

There's the pogo/jump thing you need to fix. Feels unresponsive. Jump with pogo and turn off the pogo in air, but hold jump. In the original keens, after you land, you will jump once more.

Or: impossible pogo jump and land on an edge (like in the second level on the single green tiles). You land on them, but the falling animation is still playing.

Or when you impossible pogo jump towards a vertical wall, but try to turn back. Feels like you're attached to the wall and can't turn back. It's like there's something off with the inertia thing.

When you grab a ledge, in the original keens, if you press the opposite direction, you fall.
More from me: Planet Cloudius IX | Jill 4 | Dave levels
Top

Thanks for the feedback!

This morning I briefly tried to jump repeatedly while moving and it felt responsive to me. Although I could be biased from having worked on it so much. What operating system do you use? I'll try to find someone else who uses the same one to test it out and see if that could be it. Also, when I get more time I'll compare it to the original.

I think I know how to fix being attached to a wall and the falling animation as well. And while testing that out myself I found another bug that has to do with sprite layering when standing next to an edge. I'll fix that as well.
Top
Post Reply
15 posts • Page 1 of 1