Here is where to post about the latest Commander Keen fangame or modification you've finished, a new website you've made, or another Keen-related creation.
Post Reply
20 posts

Ooh! This is the one I helped with!

Ah, wish I could've been able to do more on my part but I've been completely missing in action for like a whole year. "Collab" is a rather generous term at this point.

I think I only actually did like, maybe a quarter of the graphics, and most of those were just following a blueprint. But hey, it was a ton of fun working on this for the part that I did!

I love the name Sunset. That's a much better name than the working title IMO (which was Ancient Aliens, for those of you that expressed interest in the original "help wanted" thread; it's this one!

), since that's such a key part of the aesthetic. Even more so now, it looks like.

It'll be interesting to go through and see all that's changed here. There was no story last time I did any work on this. The dialogue with the BwB is great stuff

, and omg the map dinosaur thing is named Skippy I love that. Such a perfect name.

This mod has so many cool new mechanics. I highly recommend for everyone to at least play just these first four levels, to see all the different main game modes. Tech demo stuff.

Don't be too intimidated, the first level is actually easier than Keen 1. 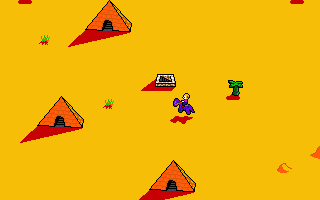 Has anyone done gameplay video of this yet?

There's a lot of great reactions to be had here. Even if it's just raw DOSBox video, it would be very cool (and entertaining) to see how people first react to the new environments. And I'm sure KeenRush especially would appreciate the live feedback.

Thank you to everyone who's left replies, reactions, and reviews! I'll see if I can get a chance to respond to some of them soonish. Keep 'em coming!

There's a lot of great reactions to be had here. Even if it's just raw DOSBox video, it would be very cool (and entertaining) to see how people first react to the new environments. And I'm sure KeenRush especially would appreciate the live feedback.

Someone get Lingyan203 (LY203 Productions on YouTube) on this, stat!
Top

I've been pretty guilty of working on Keen mods without actually playing other people's stuff. I have a huge backlog of commercial games to play, let alone Keen mods. With it being Keen Day, I resolved to play this, and I managed to finish it in one sitting (minus Pyramid of Pain; that level is too sadistic even for me).

At the risk of sounding pretentious, there's really a sense of artistry here that transcends what one might typically expect from a Keen 1 mod. I think the appeal for this kind of game, like most Keen Vorticons mods, is incredibly niche given the primitive graphics, PC speaker sounds, and lack of music. I'll admit that even I'm not always that interested in Vorticon mods due to these limitations. However, these aspects contribute beautifully to Sunset. I have a phrase I've used to describe this in a handful of other games: atmospheric minimalism. Sometimes, less is more. It's a bit like abstract art, where the world is more of a suggestion for your imagination to fill in. I think Keen 1 really excelled at this, and so does this game.

I think it also fitting that the story is so minimal here. In fact, the story texts seem to poke fun at the idea of expecting a story, not to mention that the font is (intentionally or not) pretty hard to read, so I didn't find myself really wanting to read the text. But I think that works here. A mod like this is more about evoking a feeling rather than trying to tell a coherent story.

The art here is really great. The color palette really contributes to the mood of the game, which is mysterious and alien, but also somewhat calming and surreal. I especially love the visual of Keen on the world map riding that creature (I think it was named Skippy in game?) while surrounded by pyramids. That imagery feels very iconic.

I particularly loved the early levels of this game, where the game evoked a really strong sense of discovery. Although, in other mods, it can be interesting to see how modders recombine the mechanics of the existing Keen games in new and clever ways, you rarely feel a sense of surprise because you already know the core rules that govern the original games. But here, by some patching vodoo I can't even fathom, it feels as though anything can happen. I don't need to list out everything, but there was a lot here that wowed me. As the game progresses, it was interesting how the levels transitioned to being less about discovery and more about combining these mechanics in more complicated and interesting ways. Although the tone felt a bit different by the end, I did really enjoy the progression to more complicated ideas in these later levels. The level Climbing Flames was particularly impressive for how it created multiple paths up and down while also utilizing the light/dark mechanic.

Interestingly, it took me a while to notice how the levels filled in. I noticed that the levels seemed to progress from more introductory versions to harder versions, and I wasn't sure how you were enforcing that order. When I finally realized that new levels appeared on the map (I think) after completing old ones, that was a really neat discovery.

I found the difficulty mostly very well balanced, except for an odd jump or section here and there. But, I do play Keen mods with save states via a modified version of DosBox, so that does warp my perspective a little. I think save states are great for a game like this, because I can easily retry a section if I miss a jump or timing. I also really appreciated the lack of combat in this game. I generally prefer Keen games that are more exploration and puzzle focused, and I find the combat (especially in Keens 2 and 3) to be a pain. Keeping this combat free really contributed to my enjoyment of the level design. I can definitely sense the effort you put into making these levels accessible. The enemy and hazard placements mostly feel very restrained, more like Keen 1 than Keens 2 or 3.

The only two levels I didn't particularly enjoy were the ones where you have to navigate a dark mazelike level using the light generated by a bird/insect creature. Specifically the free-exploration ones; I really liked the twist in that one level where you instead have to follow and keep up with the creature. But for the two free-exploration ones, I kind of just felt like I was stumbling around in the dark, especially Black Vaults. I don't think I would have found the willpower to complete those without save states due to the occasional traps. And, although the light effect is a really impressive technical achievement, it isn't necessarily pleasant to look at for such a long time.

I know I've written a lot, but this mod deserves it. It's too easy for mods, especially esoteric mods like this one, to fall under the cracks these days given the sheer volume of things to play. But I really do think this is a masterpiece. Thank you to everyone involved!

I finally got around to playing this, and wow, that was unexpected, although perhaps that's to be expected from a Keenrush mod.

I found the top down gameplay in the libraries to be the most visually appealing and intriguing. The level design, while simple, was fun and had me exploring. This kind of gameplay is an amazing addition to Keen.

I didn't like the luma lightbug levels. I can appreciate the mechanisms behind the design, but boy was it a headache to play. I actually missed the suicide feature from Fall Up in these levels because of how frustratingly lost I felt. The best of these was the one where you have to follow the bug, mixing caution with speed. I enjoyed letting the bug know I wasn't fooled at certain moments, or when it sped up had me swearing, "get back here you!"

The top down riding Skippy levels were simple, fun, and visually inspired.

The more standard platforming was well executed, if visually sterile (I suppose this is symptomatic of Keen Vorticons. There's a stillness and blockyness that I find almost unsettling). Really liked the water gameplay, and how the level design took full advantage of how things could change based on items collected. Routinely I found myself complimenting how very clever you were haha.

Overall, Keenrush, I think you demonstrate a mastery of redefining gameplay and level design. You're consistently able to offer new experiences and puzzles (or puzzles that feel new), and you've far surpassed the day's of old and reputation for "difficult" design (the difficulty here was perfect, honestly, despite my gripes about the lightbug).
The PCKF Rules
Top
Post Reply
20 posts