Here is where to post about the latest Commander Keen fangame or modification you've finished, a new website you've made, or another Keen-related creation.
Post Reply
12 posts • Page 1 of 1

Yes unfortunately here's another Benvolio mod ready to be served up to the unsuspecting community.

It's called "Aargh the Garg in: New Yorp City".

Grab it now and get started with adventuring and (probably) ragequitting.

(sorry it's a dropbox link for now, I will get on to my dad to update the Workbench in due course but last time frankly it took days to get the thing uploaded and it drove me up the wall).
Top

I haven't actually played this mod, but just by running the patch file through my patching utility I was made aware of a few issues in the patch file:

The patches in lines 171, 179, 188, 191, 206, 208 and 211 are overwriting other parts that have already been patched. For the most part, this is overwriting blank spaces with newline characters followed by a terminating 0. This may or may not have a visible effect in-game. Lines 206 and 208 are perhaps the most problematic ones, as line 206 overwrites two "G"s (possibly from an "ARRGGGGGGGGGGH!" string), turning it into "ARRGGGGGGGG". Line 208 overwrites the dangling "H!" string with more text ("He vents his ").

Lines 288 to 299 and line 349 are trying to write word values (16 bits) as a byte value (8 bits) and obviously end up patching only half the data. This isn't a problem in your mod, since these patches are all dummies that try to write the same value already stored at that offset. But it will become a huge problem when you actually try to change the values. In CKPATCH syntax, you always have to add a W at the end of a number when you're trying to patch a word value, so you must use "%patch $3C12 $FF88W" instead of "%patch $3C12 $FF88". Since CKPATCH doesn't warn you about such issues in the patch file, this can be a pain to track down.
Hail to the K1n9, baby!
http://k1n9duk3.shikadi.net
Top

Thanks for inspecting the patchfile with such attention to detail. First to reassure, the game works perfectly well in the setting I have tested it though the one or two text patches you mention probably have at least some untidy effects but nothing I couldn't live with. The root reason for the inaccurate lengths is that these are patches I have been reusing and modifying since about 2002, copying between projects as I go, so minor errors might well be picked up.

I must take a closer look at the patches writing words as bytes. I am aware (at the most basic level imaginable) that bytes and words are two different things. I also am aware of the W suffix - indeed Keenwiki patches often contain this for obvious reasons. However it seems that the ck1patch version I have been using (which may very well be an outdated version) rejects any "W"s as "invalid numerical format".

Years ago I used to just delete the W - I guess things sometimes worked fine when I did this but often probably didn't and that was probably the reason. A few of those patches probably hung around in my file.

More recently I became aware simply deleting W was wrong. Instead I convert to bytes, following examples on keenwiki, so the $FF88W would be turned into $88 $FF. This seems to work, if not every time, at least enough of the time to allpw me to complete my game.

Anyhow for sure it is interesting to take a look at these things and learn more for next time. I will probably make sure I'm running the correct ck1patch for next time in case that is the issue. Now, meanwhile, again let me reassure everyone that the game has shown no signs of instability over thousands of playtests over the past month! Of course I will welcome reports of issues with the running of the mod.
Top

In my opinion your mod is freaking hard. As soon as I red about the "rage quitting" I wasn't sure if I wanted to try it. But then I decided to test it anyway since you make good quality mods. To put it simply: the difficulty ruined it for me. I like the graphics and I like what you've done. I beat a few levels. I like that there are unlimited lives etc. But some levels are just... unnecessary too hard for me, and that drove me away. I know it's tempting to make hard levels, but.. why? Perhaps I'll need to spend hours and hours into mastering and beating them and I don't feel like doing it now. I didn't post because I'll was going to complain about the hard difficulty. And since you asked, here I am: complaining... Others, like Keenrush, may like the hard difficulty. But even Keenrush made the unthinkable with his latest mod. There are the occasional hard parts in his one, but overall it is more on the medium side of the difficulty and it's easier than his previous ones. That made it quite more enjoyable for me.
More from me: Planet Cloudius IX | Jill 4 | Dave levels
Top

I just beat it and it's not that hard, except for that level where you go back and forth through fire multiple times, but I beat it after a few tries. It would be a lot easier if I could press Ctrl and Alt at the same time.

I beat it in one sitting because of the short levels and the lack of ammo and lives to worry about, which was nice. I didn't find the secret level though.

It's strange how few point items there are, and the fact that some of them seem to be unreachable. Those strange point items that look like numbers were fun to collect though. It's also weird how there was no ending after I beat all the levels.

I guess Benvolio was just lazy!

@Roobar Thanks for writing about my mod and honestly it's (for me anyway) preferable to get a resonse than to feel like ones project is being ignored. I don't know what to say to you apart from that. To me, the level design of this mod hinges on a difficult scenario which must be overcome but the trade off is that once you have beaten that obstacle the level is safely over. We know how big vorticons levels are frustrating because 15 minutes of precisely executed play can go to waste with one unforced error in a large level.

The main thing in this mod is that I wanted to put a few novel concepts (like jumping through rings of fire, ducking under ice) into practice. I can't really see any other way to have these mechanics in a mod other than what I have done. Believe me I tweaked things endlessly. Even trying to make the garg's collision boxes more lenient, but that created new problems so had its limitations too.

@CHOCOLATE MILK Thanks for playing through. Yes those jumping through fire bits are difficult (especially the ones that are two tiles wide). I tried at least to make a learning curve with easier implementations preceding harder ones. I agree the controls are difficult - again that is how the vorticons engine is. I think if I could have slowed the engine slightly I might have but I didn't seem to have a way of doing this as the patch for engine speed only imcreases it.

Regarding the point items, CHOCOLATE MILK, may I clarify: did you beat all 15 levels (excluding secret) and still not have 150 points? If so, this might indicate things need adjusting. Collecting all points (and yes, all points can be collected without cheats) means that more than half the requirement is achieved before even crossing over in the teleporter to the city side of the map.

Also, I hope you realised that the "number" items subtract points. I don't think there are enougj of them in there to severely harm your chances of winning the game but maybe there are. I recommend that if you hit one of them you then jump in a fire or something as its subtractive effects won't be kept after death.

There is a finale, let me reaasure you. Maybe a little bit of a lacklustre one but it brings at least some closure.

Anyway thanks for playing guys! It would be great to have a few more people's opinions too... it would (as Roobar alluded to) be nice to have KeenRush's thoughts. But his presence is rare around here these days. We shall see...
Top

Don't worry, I was just joking about not understanding the points. I did read the help file after doing all the levels!

I did replay it actually getting the points and won with 3/4 levels left.
Top

I decided to do a voiceovered youtube video of the mod, more to practice my Youtube skills than anything else. Go ahead and check it out, you can hear a little commentary about the making of the mod.

I gave it a try and completed all but three levels (and got 90 points, no I didn't read the objective before stopping). While it has some difficult parts, the fact that most levels can be completed in 20 seconds and that you have infinite lives means that in general the difficulty isn't too absurd. When I made a mod where you could also duck (by "shooting" instead of "pogoing") I didn't put in any jumping challenge, missed opportunity?

this mod comes with a really neat premise. I love the fact that you can explore Mars as Gaaaaarrrrrggggg.

also the mechanic to duck instead of having a pogo opens up a lot of new ways to build and design levels. And I love the ideas you came up with. especially the use of switches seem very clever to me.

on the other hand my Vorticons skills are kind of rusty. I don't have the patience no more to do that precision jumps I am confronted with in this mod. don't get me wrong on this. I do think that the puzzles are well structured. but my skill and reaction level shrunk over the years. As a kid I might have spent hours solving certain hours and hours to solve certain areas. unfortunately this abundance of patience is long gone. most Vorticon mods give me a real hard time. and so is yours.

but again! having Garg as a main character is an awesome choice! I love that Idea. those hidden messages are also neat. and changing colour palettes seems to be a thing these days. I love the even darker red tones you picked!


that said, I think you need to remember to tease people with some screenshots. let me do that real quick: 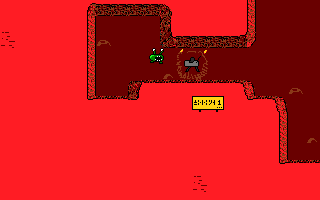 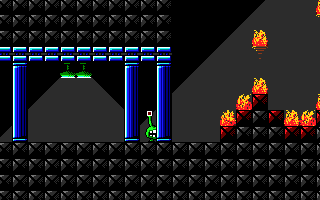 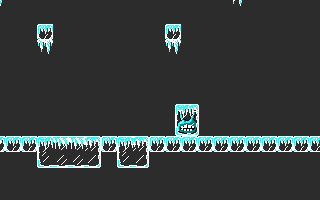 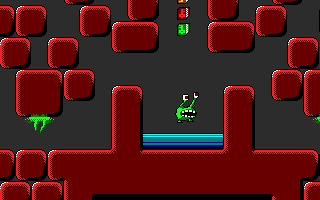 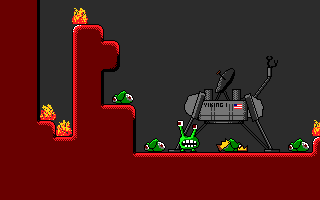 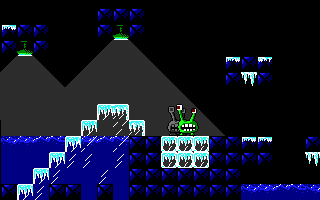