Here is where to post about the latest Commander Keen fangame or modification you've finished, a new website you've made, or another Keen-related creation.
Post Reply
3 posts • Page 1 of 1 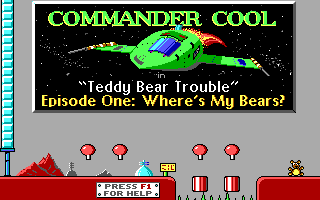 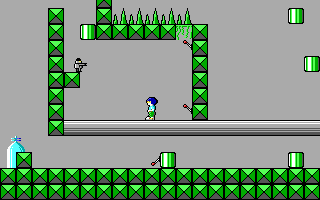 In case you missed the public beta thread:


This Keen 1 mod started back in 2014 as a levelpack entitled "Back to Mars" and was later changed to star my original character. There were several long hiatuses in production.
In this mod, you play as Commander Cool as he explores Mars trying to retrieve his teddy bears, which were stolen by the Martians.

Thanks to everyone who played the public beta and gave feedback!

Review time! I did help write the story, and contributed a few small graphics here and there, so I can't comment on that. But as for the rest of it....

This is a nice levelpack, half-mod, whatever you want to call it. It's surprisingly polished, maybe more than you might expect from this type of production. The strongest point would have to be the levels.

The levels are well-designed and easy to follow, yet provide puzzles clever enough to make the player stop and think. The more complex parts are generally in safer places, allowing the player room to breathe to figure things out. The difficulty progression throughout the mod is smooth and gradual. Just remember to wear your helmets; it gets a little tricky towards the end.

A characteristic feature of this mod is the unique use of bridges and switches. The level Green Land first introduces the midair bridge switch, introducing you to the idea in a straightforward manner and then immediately expanding upon the concept, providing new and unique puzzles revolving around this core idea. Further levels continue to present new variations on the use of the bridges.

Besides bridge puzzles, we also see other areas of clever detail in the level design. For instance, the level Frozen Shrine provides an easier path through a difficult area for those observant enough to catch it.

While simple in style as Marooned on Mars is, this mod manages to capture a few random moments of atmosphere. Near the end of Hopeless Jail we find a lonely billboard of a robot floating in the sky above the Martian landscape with a few small red platforms, which gave me a surprisingly strong sense of deserted and barren emptiness, similar to the earth environments of Pixar's WALL-E.

Overall, a fun romp through a familiar environment, in an endearing expedition to save your beloved teddy bears. If you're itching to explore the increasingly expansive landscapes of Mars once again, give this one a go. If you like Vorticons Keen, you'll love this mod.


"Makes me wonder where my own teddy bears are." --IGN
"Friendly. Very friendly. Too friendly."

I have been working on a small update to this mod. If anyone has found any bugs, please report them.

Has anyone played the full release yet?
Commander Cool in "Where's My Bears?" | My YouTube channel
Top
Post Reply
3 posts • Page 1 of 1