A general chat area, here you can post anything that doesn't belong in another forum.
Post Reply
8 posts • Page 1 of 1

Well, if Americans and Aussies can get their own threads, then I want one for my location. Only a small minority of PCKF members are familiar with this place (only keenmaster486 and myself, AFAIK), so perhaps it'd be fun to have a thread where non-Fribbulus Xaxians can ask us questions about this quirky planet.

To start with, some basic information. I wasn't born here–I'm not a tru-Bloog Xaxian–but my six years of residence here should allow me to answer most of your questions. I don't actually live on the planet itself, but rather on the Blooglab Space Station, which is a wonderful place with a long-standing tradition of producing delicacies in abundance. Their cooking is fantastic! So although the segregation has caused this space station's nation to develop a culture that differs in various ways from the cultures on the planet, we're still close enough to identify as Fribbulus Xaxians. I visit the planet itself regularly to meet with some Fleex Friends. In fact, I was there last Friday. We had plans to visit a famous sandwich restaurant, but some lower-class Bloogs broke in the night before and smashed the place (in two senses of the word; it drove them to bankruptcy), so we went picknicking instead. That's a common occurence, by the way, a real plague, but I suppose every place has its downsides.

Do you ride Blooglets and/or satellites to work?

What is your opinion on an intelligence test prerequisite for open carrying giant clubs as weapons?

There seemed to be a lot of deforestation when I last visited. Is there some kind of activism going on to resolve it or have corporate interests rendered this irreversible?

how does a fried bip taste?
are there any dopefishes living in the rivers/oceans of the planet?
Top 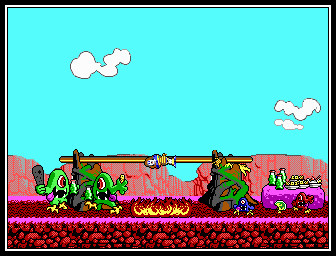 I myself only have Xaxian roots on my mother's side.
I flermmed the plootash just like you asked.
Very silly indeed: https://audaxeundum.wordpress.com/
Top

The hey kind of business is conducted in the business district? It involves rayguns?
What you really need, not what you think you ought to want.
Top

Commander Spleen wrote:Do you ride Blooglets and/or satellites to work?

There are plans to implement satellite travel, but it's still in the early stages. Some people just hold on to one when they see one, but you can get fined for that. Blooglets are used for public transport, but instead of riding one, you just let yourself get pushed to your destination (or to the next ditch, in which case you have to jump over the ditch and let another Blooglet carry you further).


Commander Spleen wrote:What is your opinion on an intelligence test prerequisite for open carrying giant clubs as weapons?

There actually was a referendum on that, and the majority voted for it. The problem is that most violations are met with violence involving giant clubs. Controlling the behaviour of the unintelligent (people call it 'intellectually disabled' here, but I disagree with that term as those intelligent levels are normal for that species) costs more in tax money than most people want the government to spend on it. So although it's technically illegal, there's a non-enforcement policy.