I thought I made a thread about this before but I cannot find it.

So here you go - a thread in which you can post pictures of Commander Keen games, old and new, running natively without DOSBox on retro PCs. Could even be old pictures from back in the day as well as new pictures from the present day. 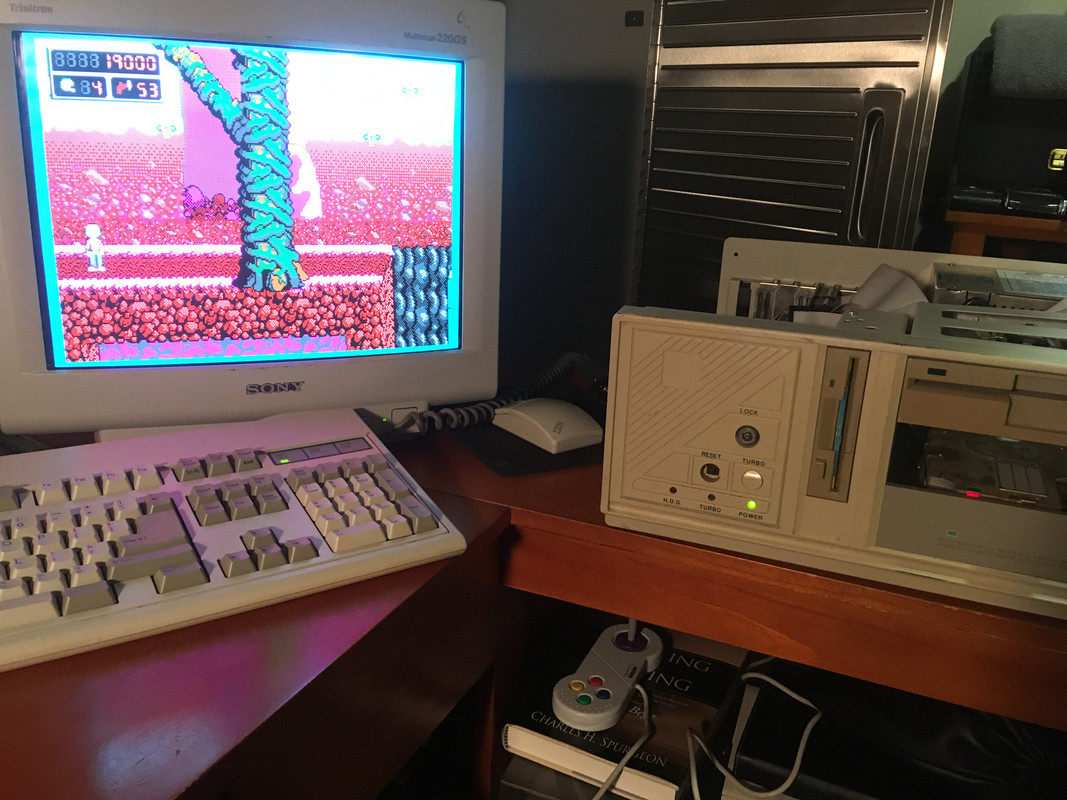 Got this 286 machine a few days ago and have been messing around with it. Pretty fun to play with. Keen 6 is running direct from a floppy disk in this picture - I had to re-compress the executable with UPX instead of LZEXE in order to get it to fit on a single 720K floppy.
I flermmed the plootash just like you asked.
Very silly indeed: https://audaxeundum.wordpress.com/
Top

Oooh! Very noice! You're very lucky to have this. I think I've got a very similar keyboard at one point. I don't have any ancient hardware left unfortunately. Is that a gravis gamepad? I wanted one of these when I saw one in JJ1.
More from me: Planet Cloudius IX | Jill 4 | Dave levels
Top

Dang that's gorgeous. So you found another 286 then? How many have you collected?

Man, I wish I had an old setup like that. The oldest computer in my household anytime recently was a custom-built (by my dad) Windows 2000 computer which was working off and on for about 20 years (I think someone said it was), until we finally got rid of it a few years ago.

It had been the central family computer for the greater part of it's lifespan, although it switched between "owners" a few times depending on whichever of us kids didn't have our own computer yet, but we still often took turns using it. We called it The Big Computer, because practically all the other computers we had around were laptops (even though we did have a couple other desktops around, we still called it that for some reason

). And we most certainly played Keen on it, up to it's last days. I don't have any pics though unfortunately....

Hahahahaha, I did not notice the post count. Nice!!

Thanks for linking to my old thread. I'm going to update the image links there so they work again. Edit: done. Now the old thread has the original images again.

Unfortunately I had to get rid of the other 286 about a year ago, in order to make space when moving... it was sad. But I have this one now and it will not be going away

It is not too difficult to find these on eBay; only they are very expensive. Mostly people want upwards of $200 for one. I found this one for less because it did not have a video card, so I put my own VGA card in it. You can also find old hardware at recycle centers, probably the best place for that as they often almost give the stuff away.

Yes that is a Gravis Gamepad! Same reason I got it - the product placement in Jazz Jackrabbit is just too cool. Plus being directly supported by Keen Galaxy.

Right now unfortunately I cannot get the sound card working in the 286. Will be working on that further today =)
I flermmed the plootash just like you asked.
Very silly indeed: https://audaxeundum.wordpress.com/
Top

Ah, the adlib or soundblaster cards are probably the biggest reason I would want to have such PC. I just want to hear the authentic music and sounds, not the dosbox ones.
More from me: Planet Cloudius IX | Jill 4 | Dave levels
Top

To be honest, the DOSBox emulation is very, very good. I cannot tell the difference unless I am listening on a good amplifier and speakers or good headphones, and even then it's subtle.

A lot of the time, people would use clone cards such as the ESS Audiodrive, or various Crystal cards, which would sound fine but not exactly the same, just like DOSBox. Later on, for the Sound Blaster AWE64, Creative Labs used their in-house clone chip for Adlib, which many people don't like compared to the real deal.

In my later PCs (486, Pentium, MMX, etc) I try to use real Sound Blaster 16 cards because they are cheap and widely available, and most of them have a real Yamaha OPL2/OPL3 chip. In this 286 I'm trying to use a YMF719 based card which is basically a Yamaha-made Sound Blaster clone which means it does have real OPL3.
I flermmed the plootash just like you asked.
Very silly indeed: https://audaxeundum.wordpress.com/
Top

Update: I got the sound working. All I needed was the initialization tool.

I also got the hard drive working, sort of. It's a 43 MB drive, but there is an area that is bad - so I made an 11 MB partition that goes just up to the bad area, to get around the problem. Man, that drive is slow! The loading dialogs in Keen 6 actually take enough time that their existence is justified.
I flermmed the plootash just like you asked.
Very silly indeed: https://audaxeundum.wordpress.com/
Top

Beautiful. I am of the belief that beauty is intrinsic to old things relative to new things. This applies to cars, buldings and music. And I'm pretty sure it applies to computers too. In fact, I would love little more than to open a museum of old computers. 80s PCs might seem unremarkable to today's audiences but if I buy a collection of them now then open museum in 2040 or something it will surely be a hit... might even save me from having to funnel earnings into a pension fund!
Top

Benvolio, may I help you with your dream?

In other news, I have discovered that Netkeen will not run on a 286. Just hangs the entire system. Very sad!

Beats me whether the 286 has enough power to do netplay though.

Next project: Netkeen that runs on an 8088/286 and has a null modem serial connection mode! Maybe even Netkeen using the CK1 engine!
I flermmed the plootash just like you asked.
Very silly indeed: https://audaxeundum.wordpress.com/
Top

Benvolio wrote:80s PCs might seem unremarkable to today's audiences but if I buy a collection of them now then open museum in 2040 or something it will surely be a hit...

You could probably do that with current PCs people are throwing away, given how suddenly 2000s era PCs have polluted the retro/vintage scene over the past 5 years.
INFORMATION SUPER JIMAGE - Commander Keen Mods on Facebook
Top

Current PC's are the antithesis of the very reason I enjoy retro systems. I anticipate only nostalgia factor associated with them in the future... kind of like Windows XP machines today.

There's something about, for example, an original IBM PC that transcends mere nostalgia.
I flermmed the plootash just like you asked.
Very silly indeed: https://audaxeundum.wordpress.com/
Top

I just ran a disassembler on a version of NetKeen I had lying around (executable is dated March 26, 2013) and I saw some 386 instructions in there. Those are illegal instructions on a 286, so the system will halt when it encounters one of them. Ironically enough, the first occurence of register EAX (which doesn't exist on a 286) I found was in some some code that looks like it's trying to detect the CPU type. But the code doesn't appear to be used anywhere, at least not directly. If NetKeen would actually use that code, it could quit and print out an error message saying that you need at least a 386 to run it.
Hail to the K1n9, baby!
http://k1n9duk3.shikadi.net
Top

keenmaster486 wrote:Current PC's are the antithesis of the very reason I enjoy retro systems. I anticipate only nostalgia factor associated with them in the future... kind of like Windows XP machines today.

Agreed. Though it makes me shudder to imagine it, there will be a generation coming of age in 10-15 years who grew up with these terrible systems and recall the flaky Windows 10 experience as a highlight of their childhood/adolescence in the same manner as AOL and COD.

Anyway, here are some easy Facebook rips going back through the past 6 years. There are more photos buried around which I'll upload another time.

286 Amstrad PPC640 running the CGA version of Keen 4 (quite well apart from the lack of a backlight). This was at a demoparty in Sydney. We ended up running a super annoying QBasic demo on it at the party.

Not an old computer but I set up a USB Linux with DOSBox and a bunch of Keen mods on one of the venue's computers at the same party.

One of my Keen mods running on an x86 Commodore at a retro gathering in Adelaide (can't recall whether it was 286 or 386 at the moment).

Keen Dreams native port on an Amiga 1200 with Vampire accelerator at the Adelaide retro night.

A 486sx I found floating around my collection. This was a highly regrettable accidentally-on-purpose disposal during a shed cleanup in 2016. The hard drive controller wasn't working but I could boot from a floppy disk. I may still have the CPU though. Pretty sure I had tried swapping it with a 586 and didn't swap them back.

Finally, this was my setup at one point during the mid 90s. 386 40MHz 4MB RAM 540MB HDD on the right, Apple IIgs on the left. The Apple was from my primary school when they upgraded to new PCs. Some crazy relatives sold it off along with a really nice collection of disks when my brother took it around for a sleepover and we didn't get around to picking it up for a week or two. I bought another one a few years ago.

Still got the 386 motherboard and the front panel from the case. The board needs repairs after a battery leak but should work fine when that's fixed.

someone sent me this just recently. might fit the topic, I thought to myself. this could have been me... 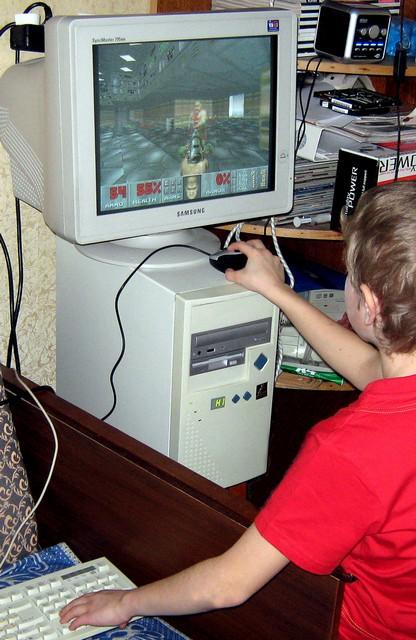 By the way, this is the fist PC I ever played Doom on. Maybe Keen, too, I don't remember. What I know for sure is that I killed the Keens in Doom II long before I ever played any Keen games.
Hail to the K1n9, baby!
http://k1n9duk3.shikadi.net
Top
Post Reply
20 posts