A general chat area, here you can post anything that doesn't belong in another forum.
Post Reply
6 posts • Page 1 of 1

I was feeling curious about the range of posts per day PCKF gets, so I wrote down the total post count every day for the last year and made a graph. :D Because I like graphs.

That's really interesting. But more fascinating is that you collected all that data every day?

So what I find nteresting: more posts overall this year compared to the last (even though there is not enough data, but it look like the last year was pretty dry). This seems surprising to me considering how less active was the community here before the new keen announcement. What happened on March 15th, the Mortimer day? There were 2 mods released? It didn't seemed too crowded with posts those days, but it's kinda the part of the year to expect that. And another bump in posts count on June, where the new keen was announced. And since then, posts haven't stopped, though are gradually decreasing as that fades out. Though I think when the new keen gets actually relesed, we will see another peak of comments. Flat chart when I released Planet Cloudis IX. It would be interesting to compare to 2009 or so, when keen 9 was released. There were 4-5 pages of posts per day in the release date of the major mods back then... aah. Good times. I consider that period the "golden age" of PCKF community. Everything was looking so promising back then on all fronts: mods, active community, posts, art etc. Or I could call it the "second renaissance" (that began from Keen 7 and ended shortly after keen 9). The first would be the early 2000s where the first levels were introduced along with many fan games. Before the 2000s there was the "dark age": slow internet, few websites and the forum didn't existed. But the very basic foundations of modding were forged by few people.
More from me: Planet Cloudius IX | Jill 4 | Dave levels
Top

Roobar wrote: ↑Mon Jul 01, 2019 10:13 That's really interesting. But more fascinating is that you collected all that data every day? 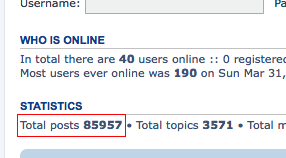 Indeed so, in fact I have wondered if there would be a way to construct a graph of that time period, however the only way I can see to get the necessary data of all those posts and their dates would be to go through every single post on PCKF and record when they were posted, since the search function does not allow limiting results to a very specific date range. Which would be a vastly larger undertaking than simply writing down a couple numbers a day.
"Friendly. Very friendly. Too friendly."

I did a quick query on the database: here's a list of the creation time of every (non-deleted) post on this site, as Unix timestamps. There are only 85,920 existing posts; the total posts statistic on the homepage is probably cached and can get out of sync.
Abiathar: the superior Keen Galaxy editor
Top

Haha oh wow, wasn't expecting that. Looks like I have a few more graphs to make now.

Very nice; great work! With that info already in the database, it should be fairly simple to develop a phpBB plugin which automatically creates post graphs.

That's assuming there isn't one already. There probably is, but unresearched suggestions is what we've come to love the net for... right?
Keening_Product was defeated before the game.

"Wise words. One day I may even understand what they mean." - Levellass
Top
Post Reply
6 posts • Page 1 of 1