A general chat area, here you can post anything that doesn't belong in another forum.
Post Reply
11 posts • Page 1 of 1

a Youtuber by the name Pixelmusement took the time to analyse Keen 1 -3 in order to encrypt our beloved alien language.to me this is a very exciting route he took with some really fine detective skills. Make sure to check his video over here:
https://www.youtube.com/watch?v=NI4-Y0-WzIo

Well, the first Apogee/3D Realms game(s) I ever got my hands on was Duke Nukem 3D, more specifically the v1.3D CD release, which also included the registered versions of Duke 1 and 2 along with the "official" Apogee/3D Realms FAQ and some other stuff. That FAQ had a translation of the Standard Galactic Alphabet in it, so I had seen the entire alphabet and its translation long before I ever played any Keen games.
Hail to the K1n9, baby!
http://k1n9duk3.shikadi.net
Top

That was a cool video, it would have been fun to work it out like that as a kid, but the first Keen I played was Keen 4 and there isn't much SGA to go off of in that one. I was aware, or I guess that I just correctly assumed, that the signs were some kid of language that could really be translated and I thought that was really cool!

I did have guesses of what signs said as a kid, but I was guessing based on context of where they were placed, not so much trying to recognize the characters. I guessed correctly that the exit signs said "exit" but some of the others signs, like the ones that just say "Hi" are rather pointless and so context of where they are placed doesn't really help you out. I wish they had used SGA signs more often and more interestingly, especially in the galaxy games. Although the letter at the end of Keen 5 was a very cool use of it. Can anyone tell me what the "High Low" signs in Keen 4 are supposed to mean? I still don't know!

I eventually did find the translation in Keen 3 when I was a little older.
Top 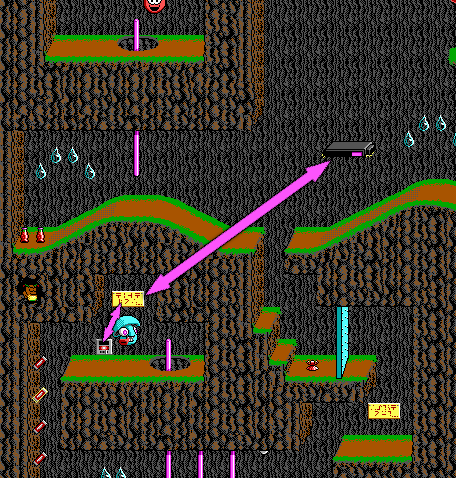 Entertaining vid for sure. I did love figuring this kind of stuff out as a kid, like deciperhing various rune alphabets from The Hobbit/Lord of the Rings. Of course for the longest time I only had Keen1 and, after a bit, Keen4, so by the time I progressed beyond this I had long-since seen the Keen6 SGA reveal.
Top

Interesting video, although it's rather clear he scripted the journey (although cleverly), Good non the less though

Nisaba wrote: ↑Tue Dec 10, 2019 0:15 Out of curiosity, how did you guys find out about the deeper meaning of these strange signs? did you read the manual? have you ignored the SGA signs? or are you even still unenlightened?

In school (on Vorticon VI)

Although i believe the SGA were created out of necessity, hear me out:
Putting text into the background took up to large area of space, so they likely tried out signs
but still took up to many pixels in additional to the space in between letters.
and then someone probly came up with the idea of glyphs/runes instead
the SGA is 4x3 to 5x4 px in it's small form, while the smallest i can make something still readable (once zoomed) is 5x3 - 5x5
(can go smaller if many letters are excluded, but will not be as clear)

funny it is that SGA is also in English, but most would probably not understand if were not in english ;p
I just know i didn't understand "Pogo" either, as here in Denmark that is a "Kængurustylte" (Canguro-Stilt)
English were Alien to me at 7 XD
The Difference Between a Mod and Fan art?, a Fan art is a Concept and a Mod is that Concept put into life.
Top

Lol at age ten I didnt know what a Pogo was, either... I think that was a generational thing not a language one though! My generation was more Harry Potter and Pokémon cards.
Top

I learned by playing that one level that had the vortikid school, my brothers told me it had a translation and was real text, but I didn't have a clue what it actually said until then 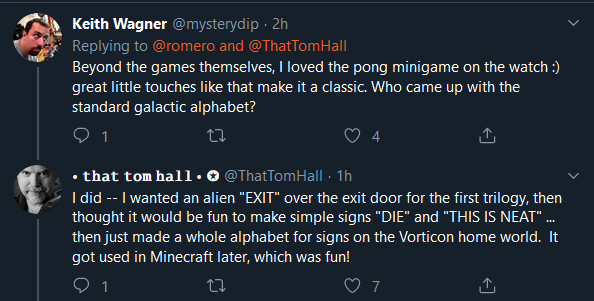 Definitely a very cool video. I tried something similar a few years back, was pretty fun.

The first time I was able to learn the SGA was when I found the secret area in Keen 6, when I was like 8 or something. From then on I had a few cheat sheets I had copied onto paper that I used to write out the signs I ran into to translate them. I think it took a few tries to get the note at the end of Keen 5 all sorted out lol.


Fast forward a few years, all the computers we had that were able to run Keen natively had died and it had been a very long while since I'd been able to play it. At this point I'd forgotten most of my knowledge of the SGA (although I was still able to recognize the more unique symbols, and when my friend showed me the game Minecraft it didn't take very long for me to realize the magic text was Standard Galactic Alphabet).

After some time, an old Windows 2000 computer we had was actually repaired into working order, which had almost all the Keen games already on it (missing Keen 1). Since I didn't remember how to read any of the symbols, I thought it would be fun to try to actually manually decipher them.

So I took a paper and laid out an alphabet chart which I filled in with the corresponding symbols I figured out as I went along. I started with the simple signs I actually remembered the meaning of such as "Exit". Then, like the video, in Keen 2 I went through all the Tantalus levels, taking the English status message given after destroying the machine to translate the same phrase on the map. At this point I believe I took what I had through all the other episodes, trying to find signs that had most of the letters I had and trying to deduce what the unknown characters in between were, Wheel-of-Fortune style.

After all that I believe I checked the in-game translation to compare. I think there were a couple I got swapped around at first (good thing I used pencil), and there may have been one I wasn't able to find anywhere, if I remember correctly.


Nowadays I have the SGA and the translation mostly memorized, so I can usually read new signs in mods (albeit very much slower than English).

On a similar topic, I have seen a few different posts on Reddit where people had learned SGA as a result of Minecraft. I wonder if anyone's gotten into Keen because of that little Easter egg. All the sources I've seen that give the translation reference its origin in Commander Keen, and show Tom Hall's original key.
"Friendly. Very friendly. Too friendly."

This is indeed a clever thing!

(Reminds me of my own alien language studies...for those of you who've played Star Ocean 4, I ended up actually figuring out that Eldarian is readable and not just gibberish.)
Writer. Translator. Player of games. Only bites when asked nicely.