All discussion about the Commander Genius project (a Keen interpreter + more).
Post Reply
6 posts • Page 1 of 1

I just downloaded the newest build of CGenius, version 2.2.8 on my Windows 10 PC. Previously I have version 1.9.9.8 installed.

(On a final note, is it possible to disable the red menu box that's on the upper right corner of the image? I suppose it does not serve any purpose on a monitor without any touch support)
Top

How did you go fullscreen?
Having fun developing stuff...
Top

I went fullscreen by starting Keen 1 in the launcher, in the games main menu entering Configure, Display and pressing the Go Fullscreen option.

I have tried adjusting the resolution settings in fullscreen, and still the image was not centered, but found it's place down on the left corner. The image itself is perfect with no issues whatsoever. On funny note is that the Size in the Display menu is always 320x200, even though the image is perfectly scaled to fit my monitors resolution of 1920x1080. Even by changing the value of Size in the display menu to 1920x1080, the value gets reset to 320x200 anyway.
Top

I just recently did some more testing here on my part. I normally used the odd resolution of 1600x1000, because this resolution is exactly the 5x integer of 320x200 (I can't stand unevenly stretched pixels, so I want to scale old games the integer way). That resolution was centered up until CGenius 2.0.1, but CGenius 2.0.2 somehow forgot how to center that resolution, even though it centered the standard 1920x1080 resolution.

CGenius 2.0.0 has a different place to store it's config files, but CGenius 2.0.1 uses the same config file as the other versions. It seems like somewhere between CGenius 2.0.8 and CGenius 2.2.0, CGenius was no longer able to edit a lot of the settings in the shared config file in the Documents folder in Windows 10 (CGenius 2.1.1 just crashed upon starting Keen 1, and the zip files for the versions between 2.1.1 and 2.2.0 were unavailable on the SourceForge server so I'm not able to pinpoint where this issue happened any more than that). I tried to rename the existing config file to see if CGenius was able to make changes if it made a fresh config file, but still the same result as using the good old config file.

As pointed out, newer builds of CGenius can't make changes to the global config file in terms of resolutions. As CGenius 2.3.0 is out now; heres the settings I was able to change and don't change via the in game menu:

Video
Cursor = works
TiltedScreen = works, but doesn't do anything (it worked properly in CGenius 2.2.0, but I haven't tested this function more than that)
FPS = works
Frameskip = works
GameRes = works, but the title screen in Keen 1 gets bugged after switching back and forth in resolutions
VirtPad = works
Border Color = works
H-Borders = works

Options
All the things seem to work here.


While we're at it; any plans of making an integer scaler to CGenius in the long run? It would be nice to just select the displays native resolution, and if there was an option for integer scaling on/off that scaled the image to the max integer (I have to make a custom resolution on the Nvidia Control Panel to make my screen accept the odd resolution of 1600x1000 now).
Top

Thanks for the extensive list. I'm already investing what is wrong in the code. We need to get that fixed for the next release.
Having fun developing stuff...
Top

I think I'm having a problem like this but in the latest release, though it's more likely a problem on my end so some help would be appreciated.

I can't seem to keep the game from displaying like the image below, it remains like this in full screen and windowed. I have tried changing settings but nothing seems to work. 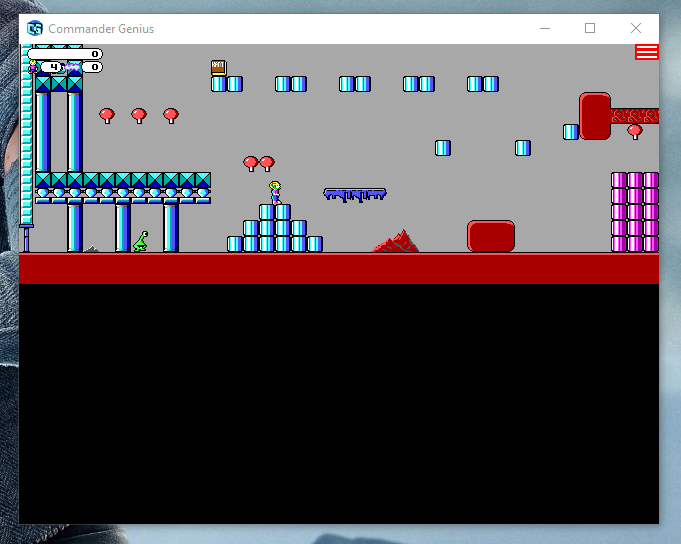