A general chat area, here you can post anything that doesn't belong in another forum.
Post Reply
9 posts • Page 1 of 1

I don't know about you guys, but this is one of my favorite times of the year. I've read through older Halloween threads on here and found many people (many in different parts of the world than me) discussing how commercialized and tacky this holiday is, and as someone who lives in the United States, I can say without hesitation that they're not wrong.

Throughout the years, I've watched Halloween change so much, and at this point, it resembles nothing like what it was 20 years ago. I've watched costumes turn from werewolves, vampires and zombies into whatever characters are popular at the moment or "sexy" costumes that in any other context would qualify as rule 34 stuff. Same with decorations. Just a few years ago I went to a local pharmacy and bought some decorations that, while technically cheap, were tasteful. Now when I go there, it's just cheap plastic garbage and those stupid inflatable decorations (those things piss me off so much. If I could, I'd lance every single one I saw.). Bottom line, Halloween is basically a "holiday" for horny teenagers now, unless you're a true horror fan.

But you know what? I don't do that. I celebrate Halloween in my own way, in which I don't treat it as a holiday, but rather a season, where me and my friends watch horror movies, play horror video games and celebrate the harvest with stuff like pumpkin treats (for things that pumpkin spice is actually meant for, like pumpkin bars and pie. I don't know who's the stupid idiot who thought putting it in yogurt or ice cream was a good idea). I still pass out candy and dress up as horror monsters and carve pumpkins, but I don't buy into the commercialization that's taken place.

Also, every October I play through Monster Bash, which is my favorite game from Apogee and one of my favorites of all time. And, since it's still got a Halloween theme, I play some Valentine's Keen too.

My favorite thing about Halloween is that there's always a new Homestar Runner special for it.
Looks like there's a short point-n-click game this year: https://homestarrunner.com/halloween-hide-n-seek

The holiday's Irish origins are well known (though its history is much more complex and ultimately is rooted in European Christianity in general with elements of the "pagan" Samhain from the early medieval celtic world mixed in). As a child I enjoyed Hallowe'en a lot and found it very exciting.

To me, I agree that the commercialisation Soul Monster describes is lamentable. But what annoys me far more is Christmas merchandise being pushed in the shops weeks before Hallowe'en has come to pass. It cheapens both holidays in my books.

I would consider Hallowe'en to be a holiday best enjoyed in a more rural setting, such as the one in which I grew up until my mid teens. One is more in touch with nature when living in the countryside. The importance of simple things like apples and nuts can be felt viscerally, as you see these things actually growing around you, rather than just packaged in plastic in a supermarket. I recall most of the material I would have retrieved from "trick-or-treating" consisted of apples and oranges, brazil nuts and monkey-nuts, 10p or 20p coins, and if one was lucky, a pumpkin-flavoured lollipop or fun-size Bounty bar. I think nowadays kids would expect a lot more.

We used to go around the local neighbourhood, and my parents had me and my sister recite a children's poem in Irish for everyone (somewhat to my embarrassment) rather than simply some cheeky "trick or treat" rhyme. My sister was usually a witch and I think I simply wore a pumpkin mask or something. After returning home we'd typically listen to music such as Carmina Burana or Saint-Saëns' "Danse Macabre".

Food traditions are also important in the enjoyment of Hallowe'en. This is something that varies geographically. For instance pumpkin pie, an American delight, remains quite foreign in Ireland and the UK though like everything else it's much more familiar nowadays than it used to be.

But to me the real Hallowe'en food is hearty Irish fare in the form of:
1. Colcannon and ham: this simple dish is mashed potato, curly-kale or cabbage, and a modest amount of finely chopped red onion, cooked and mixed up and served beside slices of boiled salty ham/bacon. Nothing could be more comforting. Traditionally bits of money would be hidden in the colcannon at Hallowe'en time and I believe my mother did this once or twice when we were children.
2. Barmbrack (or báirín breac) which is a specific fruit bread loaf. These also would contain a ring which one lucky eater would get, rendering them lucky. Even commercial versions in the shops had these in. I genuinely don't know if adding a ring is still allowed or has 21st century insurance driven health and safety won the day.

Anyway, all that remains is to remind everyone to play a game of "Halloween Horrors" today.
Top

... made by Pulse Commander 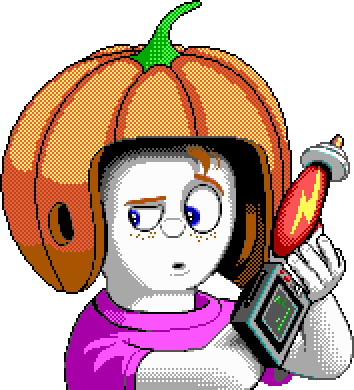 Those are awesome! The mad'n'gourdy Mushkin is my favorite!

One of the things I like about this forum is that there's so many members from all around the world, so it''s interesting to hear what everyone has to say about holidays and how they're celebrated in their respective countries (if at all). I'll admit my tangent on the commercialization of Halloween was meant to be taken in humor, but sadly there's also a lot of truth to it. And don't even get me started on Christmas, that's its own monstrosity.

I agree with you Benvolio, Halloween (and autumn in general), is better enjoyed in a rural setting, and I happen to be near a lot of farmland, so I completely understand everything you mentioned regarding that. One of my favorite things to do this time of year is to drive around or go to parks and looks at fall color, because it gets pretty nice in my neck of the woods.

Anyway, how was everyone's Halloween?

Me personally, I had a decent one. I dressed up and passed out candy for a little while, but unfortunately, I just don't get that many trick-or-treaters in my neighborhood like I used to. As for costumes, I barely saw any zombies or werewolves or vampires. As usual these days, it was mostly whatever movie/TV or video game characters are popular at the moment, so nothing really original or creative. Afterwards, I went to this one house near me that does it up really well each year, and hung out with the guys there, who remembered me from previous years and showed me some of the props they had as well as just visiting with them. After all that, I came home, had some pizza and watched Simpsons Halloween episodes followed by staying up all night playing through Monster Bash.

P.S. Even though Halloween may be over and I didn't have time to play it yesterday, I plan on playing through Halloween Horrors tonight. I'll let you know how it is Benvolio.
Top

Koshka's Kingdom just put a very charming Monster Bash fan-shrine, called the Haunted Manor! You should definitely check it out!

I love Nisaba's post! Very cool to see some of the community's creations over the years! Sounds like Benvolio has some special foods that sound interesting and yummy. I agree with Benvolio and Soul Monster on the commercialization the holiday has suffered. I sometimes feel like Charlie Brown as he felt in the original Christmas special. Speaking of Charlie Brown, the Great Pumpkin special is simply a classic!

Someone needs to make a mod where all of the enemies are big inflatable balloons, just so Soul Monster can unleash his wrath on those things!!!!!

(Keen 2 would be very good, since the big Tantalus machines can be replaced by huge balloons that get their heads popped off! Although Keen 3 could have a mega-sized balloon that would vanish into thin air.)

This year's Halloween didn't have much happening around here, although I ate quite a bit of candy. I might've earned an extra life or two.
Quillax Ship - Where you can download all of my cool, keen mods and super-marvelous fangames!
Top

Koshka's Kingdom just put a very charming Monster Bash fan-shrine, called the Haunted Manor! You should definitely check it out!

I love Nisaba's post! Very cool to see some of the community's creations over the years! Sounds like Benvolio has some special foods that sound interesting and yummy. I agree with Benvolio and Soul Monster on the commercialization the holiday has suffered. I sometimes feel like Charlie Brown as he felt in the original Christmas special. Speaking of Charlie Brown, the Great Pumpkin special is simply a classic!

Someone needs to make a mod where all of the enemies are big inflatable balloons, just so Soul Monster can unleash his wrath on those things!!!!!

(Keen 2 would be very good, since the big Tantalus machines can be replaced by huge balloons that get their heads popped off! Although Keen 3 could have a mega-sized balloon that would vanish into thin air.)

This year's Halloween didn't have much happening around here, although I ate quite a bit of candy. I might've earned an extra life or two.

I took a look at the Monster Bash shrine, and it's not too bad. Like I said, it's refreshing to see something that resembles the internet I knew and loved 20 years ago.

And yes, The Great Pumpkin Charlie Brown is a must every Halloween, there's so much to like about it. For one thing, nothing about it feels tacky, as an artist I LOVE the watercolor backdrops in Charlie Brown specials, and like my friend said, it's about kids going outside and doing stuff together before cell phones and social media, so it has a very timeless feel due to the lack of pop culture references.

You know, it's funny, I do want to get into modding, and I might have to borrow that idea for a future mod. I even have a few ideas off the top of my head: It could be called Invasion Of The Inflatables and be about Keen feeling disenchanted by the commercialization of Halloween, and going around destroying inflatable decorations in the neighborhood for some Halloween mischief.
Top

Yes, I totally agree with you on The Great Pumpkin Charlie Brown! The artwork is very lovely! The music is also very pleasant! And oh wow, it sounds like my idea could actually become a real mod!? That's funny! I can see Invasion of the Inflatables being a very fun mod to play!

It might be late to say this, but since we're talking about Halloween cartoons, have you seen The Telltale Heart by UPA? It's a 50s cartoon that's roughly 7 minutes long (from what I remember), based on the story of the same name by Edgar Allen Poe. I saw it for the first time last month, and wow, it's actually kind of spooky! The animation is pretty limited, but the way it's used makes it really work with the setting and tone, and some of the artwork looks neat! It's quite a unique cartoon, even to this day!
Quillax Ship - Where you can download all of my cool, keen mods and super-marvelous fangames!
Top
Post Reply
9 posts • Page 1 of 1