In search for missing fan-games and mods

Thanks to Grandy02 for taking the effort to track me down and for helping me to retrieve those old files! It's fun to see that this community is still going. I couldn't believe that anyone would remember me making those levels from 17-18 years ago, and I think it's awesome that Nisaba included that first level in her compilation.
Top

Again, this is pure awesomeness!!!

This is truly some outstanding news. I'm super curious how these unrevealed level designs from back in the day gonna feel today. can't wait to test them. boy, I'm enthusiastic! I don't know what to say. just have a very big smile on my lips and be super excited about all this. this is really fantastic news...
damn I'm hyped!

again, thanks a thousand for your effort

and as you all know, I was always looking lost stuff. I collected all those left overs, unused or abandoned things the community kept somewhere secret deep down under the hood of our collective unconscious. I took and ripped everything I could find for my modding projects. Same with this gold mine, be sure about that. There surely will be a Foray in the Forest towards one ore two of CharingMooses level designs... we'll see :]

Thanks for the nice comments.

Normally I would have little hope for something that lacks a working download URL, was posted 17 years ago and never mirrored by anyone. Fortunately, ChargingMoose chose a webhosting service in 2001 that still hasn't vanished, unlike many other ones. I was also motivated by the fact that it's an outstanding release. But I wouldn't have known about those levels in the first place if I hadn't saved a bunch of old threads from archive.org when they were still accessible (it was before my time, I joined in late 2004).

Nice to see you here, ChargingMoose. I've played your "new" levels, you did a great job.

By the way, a week ago I added the thread "Found some of my old notes..." You can see that CM really put a lot of effort into the creation of the first level.
PCKF Archive - The Keen Community's Past (and Present)
Top

Time for an update. I received Keen:Return from DaVince. In addition to the source and various images, an exe file is included, but there isn't that much to do if you run it. There should be more content if you open the source in Multimedia Fusion (which I don't have). The game is actually the predecessor of DaVince's Sphere-based Project Keen.

I also added a game called The Bean-with-Bacon Megarocket vs The Trecentiquindecim (BWBvsTQD), which is a two-player shooter created with Game Maker by MortimerInBlack in 2005. It's not part of the list since the ZIP file was retrieved via Wayback Machine.

Still had a copy of Q90's RKeen4. As it would never meet the KeenWiki's criteria, I added the skin mod to a new section of the PCKF Archive called "More Keen Stuff" (where you can also find neat MIDIs by the Xky). 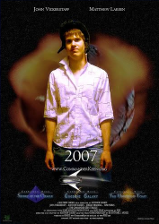 (click to enlarge)
The following is not directly related to this topic, but it's also unearthed ancient stuff that's worth mentioning, I think. The "older" members who were aound in the mid 2000s might remember the ambitious project of the young filmmaker Matthew Larsen (matlarsen) and his team. Between April and December 2006, he posted various details on the Goodbye Galaxy movie's production as well as images and music. Only a single image, the above poster, survives. It's cropped from a screenshot uploaded to Photobucket by Galaxieretter at the time. Not the full resolution, but better than nothing.

Luckily, all four MP3 files are available again. The Movie Overture (found on the Keen Remixes page) was already digged up by Malvineous in 2009. I noticed mentions of three other tracks in matlarsen's posts and asked Malv about them. He did a search for the filenames - and here they are.

Bloogwater Theme - Aliens Ate My Babysitter
Keen Beach (draft) - Tropical Ghost Oasis
Keen Montage (draft)
In case of the last song, I didn't recognise any Keen tunes, neither did Malv. If you hear something Keen-like, please tell. According to matlarsen (who disappeared and never returned to the Keen community), the montage is intended to get the overall mood of the film (sort of dark and rocky). The actual creator(s) of those tracks is/are not known by name, as Matthew only used generic terms like "music guy" and "FX guy".
PCKF Archive - The Keen Community's Past (and Present)
Top
Post Reply
19 posts