You can discuss anything about fan-made Commander Keen games here.
Post Reply
80 posts

Here are the two modified patches for the 3-up:

The 3-up is now spawned in noclip mode and it will now change to foreground priority when you pick it up.


I have made it into Struct1 in my test run and I found yet another thing to complain about: You are using the light/energy beam tiles in that level to create something similar to the zip paths in Atroxian Realm. I'm not a fan of this mechanic, since it's just exploiting a quirk in the engine's tile collision detection code. And as it turns out, this quirk depends on the frame rate (see this thread) and low frame rates tend to break the "intended" behavior. Using this quirk was fine in Atroxian Realm, since it only appeared in the optional levels. But in your game (or at least the current demo) they're not optional and therefore could make the level/game impossible to finish on some systems.

If your mod absolutely needs to use this "feature", you should limit the game's ability to adjust to low frame rates. That means the level will no longer depend too much on the CPU speed (which is good), but the game will run in slow motion if the CPU is not fast enough (but at least the levels are beatable). Use this patch:

You could also limit the frame rate to 35 fps by replacing the 3's with 2's if you want to make abolutely sure that there will be no variations in the game speed. But the demo still runs at 23.333 fps anyway, so I guess that value should be fine.
Hail to the K1n9, baby!
http://k1n9duk3.shikadi.net
Top

After taking a few months off working on this project, I have come back to it with
new eyes, and made a few graphics upgrades, here are a couple of them. 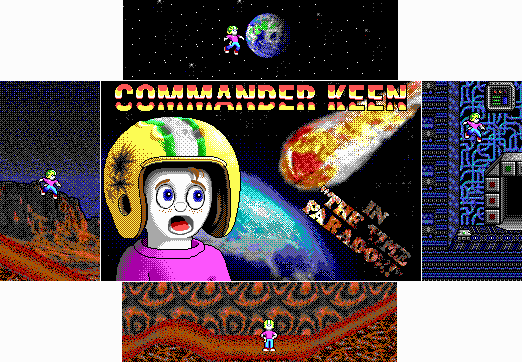 Whats being worked on currently.
A small graphics update.
Top

I played the demo version two times. In the second playthrough I found 10 levels with the W + F10 cheat. I'm looking forward a final version of the game. This mod is very exciting
Commander Keen in... Robot Attack!
Episode 13: The Ultra Omegamatic viewtopic.php?f=4&t=6802
Episode 14: Secret of the Sorcerer viewtopic.php?f=2&t=6837
Top

Any updates on this mod? Really am keen to see it come to fruition!
Top
Post Reply
80 posts