This is where you can post your Commander Keen related stories, artwork, or other stuff that is related to Commander Keen but otherwise doesn't belong in another forum.
Post Reply
8 posts • Page 1 of 1 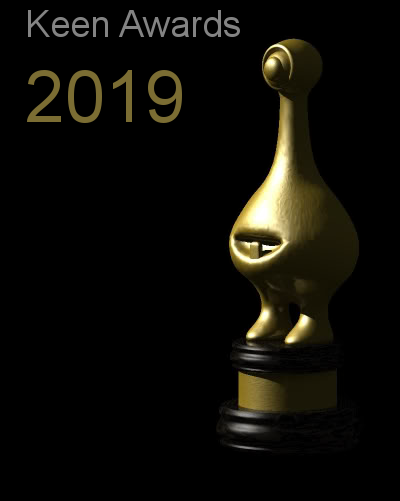 (I hope Lava89 is okay with the reuse of the Yorp trophy.)

A while ago, I created a KeenWiki article on the Keen Awards, which contains lists of all the winners. The event was held three times during the PCKF's early years to honour Keeners for the great stuff they create. There were no Keen Awards 2005 because "2005 sucked" (I don't think that's true, but whatever). Since then, there have been several unsuccessful attempts for new Keen Awards, which were usually intended to cover multiple years.

Many amazing things have been done in recent years, I think it would be cool to revive the annual Keen Awards. Works released in 2019 could be nominated, or something that received a major update in said year. The KeenWiki article contains links to the archived threads, you can see the whole process for the Keen Awards 2002 (nominations, polls, results).

I think it could work the same way again in early 2020. It's feasible as this board doesn't have hundreds of active members. The categories could be like this (only minor modifications):

4: Miscellaneous
4.1: Keenest Person of the Year
4.2: Really Keen Stuff (something great that came out of the blue)
4.3: Most Promising Project

There were also one-shot categories. Nothing comes to mind for 2019, but for the Keen Awards 2020 (in case it happens), I'm thinking of something like "Best 30th Anniversary Tribute".

What's your opinion? If you have any suggestions (for example,if you think that the number of categories should be reduced), please post them.

This is neat! I think there should also be a 5th category: "Best Keen playthrough" (or gameplay video), "Best Keen speedrun" and "Best Keen youtuber". Also, "Best new found Keen stuff" where "stuff" can be a new found glitch, or something revealed (like the John Romero Keen 7 video reveal) or something like the fact that Keen has been revived (Although that could be in a separate category "Worst thing happened to Keen"). I will reveal my nominations in a few days. In the meantime happy new year!
Top

I nominate Customized Screen Update Code made by K1n9_Duk3 for category 1.3 Best Tool.
IMO his update code is a significant step-up for all galaxy mods.

dabbing Shikadis made by Commander Spleen
"We have come to conquer you all and bring you lots of candy!" | about me | my current project: play Keen mods on a GameBoy |
Top

No pacifist runs in the community? Would be cool to see as well.
Top

No pacifist runs in the community? Would be cool to see as well.

The only pacifist runs I know are made by Shikadi-Netzwerk, but they are in German https://www.youtube.com/channel/UCxCQHa ... dmv4E-lfMQ So for such category I nominate him.

Also also there should be two categories for best mod instead of one: best vorticons mod and best galaxy mod. Maybe even 3 categories, if we consider Keen Dreams mods a non-galaxy category?
Top

That's a tough one. I would prefer adding Keen Dreams to the Galaxy group, since the core game engine is almost identical. The biggest difference is the menu system and the slightly altered gameplay mechanics (flower power instead of pogo and stunner). The former is purely cosmetical, the later could be changed via patches. A capable modder could add the stunner and the pogo into Dreams or remove them and add flower powers to Keen 4-6.

(Given what I wrote above, I'm glad that we actually had two fangames in 2019.) The nominees for best fangame are:
On a related note, we just entered a new decade, so what about handing out awards for "Best [insert category] of the decade (2010-2019)"?
Hail to the K1n9, baby!
http://k1n9duk3.shikadi.net
Top

In Aug 2005, with reference to Benvolio, XkyRauh wrote:Hey, you know... I smell a nomination for Keenest Person of 2005 coming up...

Still haven't recovered from the disappointment of cancelled Keen Awards 2005

I wonder if output of Keen content would uptick in response to a re-instated Keen Awards!
Top

Thank you for your replies so far, I'm very happy to read that you like the idea.

I've added some categories in the first post (therefore numbers in the first section changed). Vorticon and Galaxy/Dreams mods are separate now, there is also "Best Level" (from any 2019 mod, level pack or fangame) and "Best Gameplay Video" (speedruns, playthroughs etc.).
Of course, even more categories could be derived from those, but my fear is that so many categories might overcomplicate things, and there are already quite a few ones... Anyway, I also added the nominees to the list.


Roobar wrote: ↑
Tue Dec 31, 2019 15:26
Also, "Best new found Keen stuff" where "stuff" can be a new found glitch, or something revealed (like the John Romero Keen 7 video reveal) or something like the fact that Keen has been revived (Although that could be in a separate category "Worst thing happened to Keen").

Would it be okay to cover such things under "Really Keen Stuff"? For example, the Impossible Bullet Trick was the first winner in that category.

All right, since there are no other options I accept two nominations by one person for the same category in this case.

Regarding "Best of the Decade", neat idea.

But I would prefer to do that seperately for the reason stated above. Maybe even 2005 to 2018 polls for selected categories (at least mod and fangame) at some point in the future.


Benvolio wrote: ↑
Thu Jan 02, 2020 7:48
I wonder if output of Keen content would uptick in response to a re-instated Keen Awards!

That would be awesome.

I just hope that it gets done this time after 14 Award-less years.
PCKF Archive - The Keen Community's Past
Top
Post Reply
8 posts • Page 1 of 1